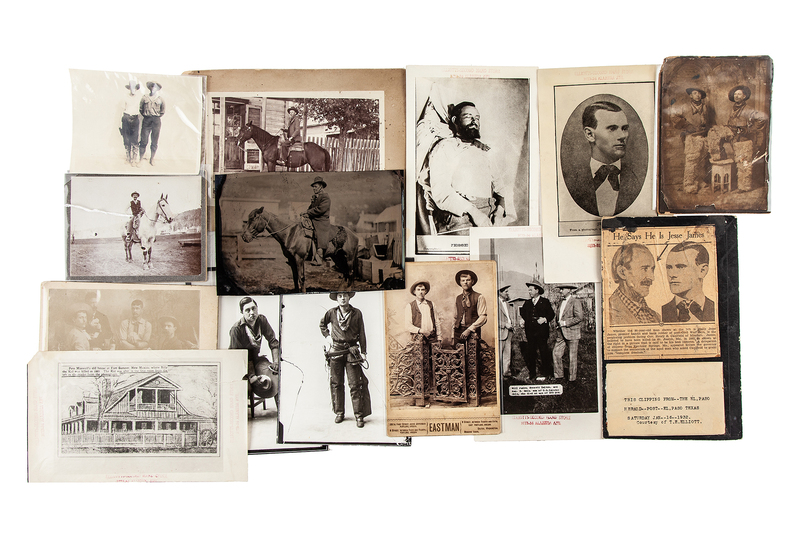 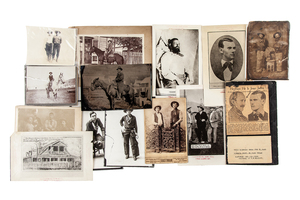 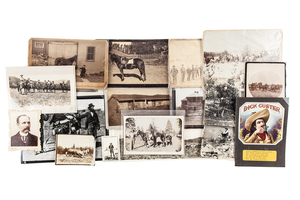 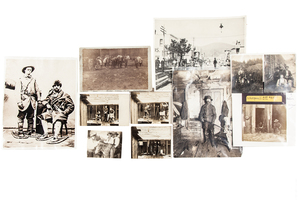 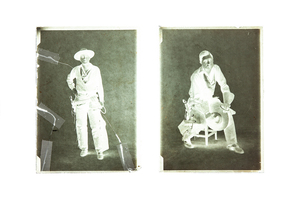 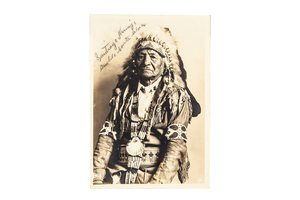 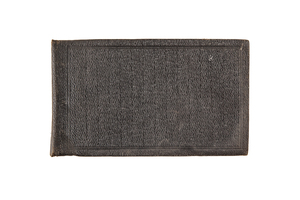 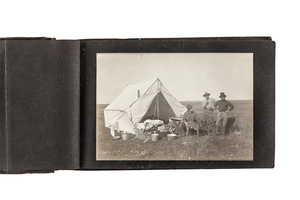 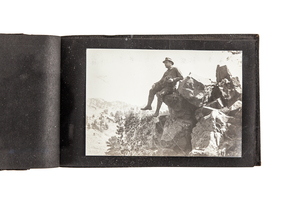 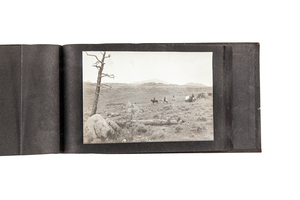 A wonderful group of early cowboy images, including an album from the K.C. Ranch in Wyoming in 1897. This was the ranch of John Nolan, one of Wyoming’s earliest settlers.

Albumen print of a group of men standing next to river, one with Remington Rolling Block rifle.

Matted photo of Santiago Naranja, a Native American of the Santa Clara Pueblo. He is wearing buckskins and a Plains Indian style war bonnet.

Two panoramic photos, one of a mule train, the other of a horse train.

A matted albumen print of an adobe house with a sign out front.

Matted albumen print of a survey party with an Ashland, Oregon stamp on the reverse. The group includes 15 men and a woman, circa 1890.

6 men with horses, one with a rifle over his shoulder, ranch setting circa 1900 matted albumen print.

Buckeye, Arizona albumen print photo of the Llano Sheep Company, group of sheep herders with wagon and sheepone man wearing a sombrero, one man sitting on a burro, matted albumen print circa 1900.

Post-mortem photo of Jesse James with three others.

Half-plate tintype of a western man, possibly Native American, sitting on a horse with buffalo fur behind saddle. There are two minor scratches on the man’s face.

Matted large albumen print of cowboy on horseback, circa 1900.

Cabinet card photo of two young men who look like cowboys, both with cigars, by Eastman, Colfax, Wshington.

Western looking man in a bunkhouse setting, loading a Winchester carbine, another Winchester on the wall, matted albumen print.

Probably a cigar box label of “Dick Custer” in cowboy hat with revolver.

Two wagons with horses, men, one with a shotgun, matted albumen print.

Photo dated 1914 of Edward Beardsley with 1873 Winchester rifle, and pistol in belt, wearing uniform tunic and tall boots. Beardsley was a man wanted for murder in New York State who was arrested soon thereafter. This photo appears to be signed by Beardsley.

A very fine small portrait photo of a gentleman, taken by Luke of Leadville, Colorado.

Man dressed as a cowboy in wooly chaps and a cartridge belt with Colt single action revolver, albumen print photo.

Albumen print photo of four men dressed as coqboys drinking and playing cards with a photo copy of the same photo.

7 men on horseback dressed as cowboys, circa 1910 photo.

Group of men who have lassoed a calf photo.

2 studio photos of man dressed as cowboy in chaps with Colt revolver on hip.

Glass plate negative of one of the above photos.

3 photos on an album page, showing them drinking out of bottles, and with guns, one an 1895 Winchester rifle.

4 Real Photo postcards of a group of men dressing as cowboys, with a Colt revolver and Winchester rifles. One card has been trimmed.

Varying. Several of the paper photos are yellowed, one quite badly, but the details are still visible. Many are in excellent condition. A few are faded. Witherell's strives to provide as much information and photographs as possible but encourages in-person inspection by bidders. Condition statements are only for general guidance and should not be relied upon as complete statements of fact and do not constitute a representation, warranty or assumption of liability by Witherell's. All lots are sold "AS IS" under terms and conditions. Please be advised we do not provide porters nor packing materials for pick ups. We do not accept credit cards.