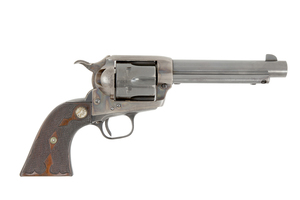 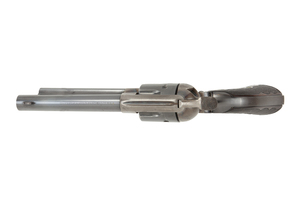 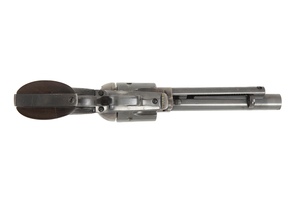 Tom Mix was Hollywood’s first cowboy star, and his expertise at riding and roping lent authenticity to his screen performances.  His career peaked during the silent era, though he did continue to work after the advent of sound.  He died tragically in a car accident while driving between Tuscon and Phoenix in 1940.

According to an affidavit present with this lot, Mix gave the present gun to Constable Ed Echols of Tuscon the day before he died.  Echols (1879-1969) was elected Sheriff for 5 consecutive terms beginning in 1936.  In his private life he was known as “Mr. Rodeo,” having been a rodeo champion in his youth. In addition to Mix, Echols was also a close friend of fellow Hollywood cowboy Will Rogers. In 1952, Echols sold the present gun to a colleague, who later sold it to jazz vocalist Mel Torme, who in 2000 consigned the gun to auction where it was purchased by the Earles.

In a 1986 letter to Mel Torme, Proper relays the history of the gun as told to him by Echols: “Ed Echols told me that this revolver belonged to Tom Mix and was presented to him by some employees at the Fox Movie Studio. Ed further mentioned that Tom Mix had sustained a broken wrist in falls from his horse and other stunt work. That was the reason he could only shoot a 32-20 rather than a 45 in his later years, and that the special hammer was shortened for his broken thumb.”

We do not sell post 1898 firearms to California residents unless they have a valid FFL or Relic and Curio license. Old West Gun Room in El Cerrito, CA will handle all in state and out of state transfers. His fees are $100 per gun plus any applicable shipping charges. By purchasing this lot you agree that you will be solely responsible for compliance with all applicable Legal Requirements governing the purchase, sale, transfer and shipping of Firearms. The Firearms must be shipped only to a Federal Firearms License holder (“FFL Holder”). You must transmit a copy of your (or your FFL Holder’s) license to the seller before the Firearms can be shipped. You must make arrangements with an FFL  Holder before placing a bid. It is very important that you contact an FFL Holder before placing a bid in order to verify the complete cost of the transfer, the legality of the item in your area, and to make sure you qualify to pass any required background checks. “Firearms” shall have the meaning provided under the Gun Control Act of 1968, 18 U.S.C. 101 et seq. “Legal Requirements” means all applicable legal requirements for the sale, transfer and transport of the item, including but not limited to statutes, regulations and/or requirements of any country, state locality, province, municipality or other government authority or regulatory entity regarding sales or auctions, the sale and/or transfer of the item, export or import control, taxation, duties or tariffs, and licensing of brokers and dealers.

Very fine to Excellent with generous traces of color. Witherell's strives to provide as much information and photographs as possible but encourages in-person inspection by bidders. Condition statements are only for general guidance and should not be relied upon as complete statements of fact and do not constitute a representation, warranty or assumption of liability by Witherell's. All lots are sold "AS IS" under terms and conditions. Please be advised we do not provide porters nor packing materials for pick ups.