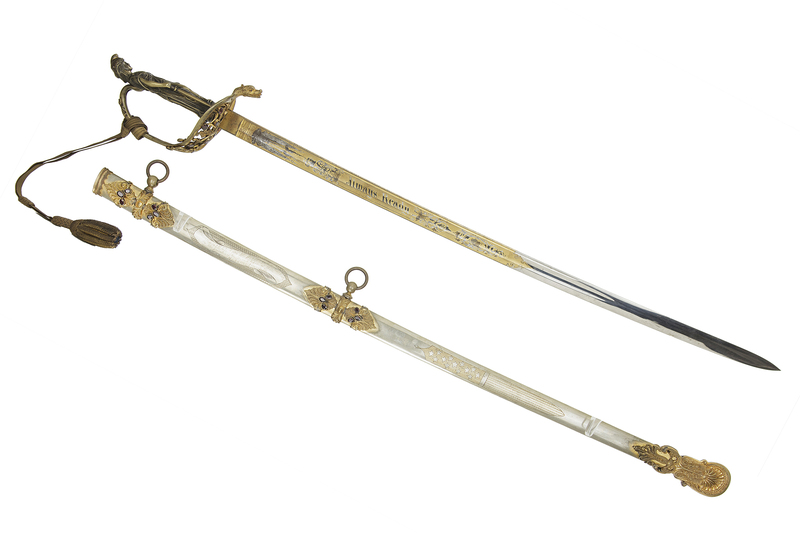 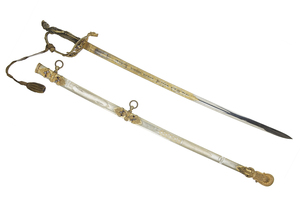 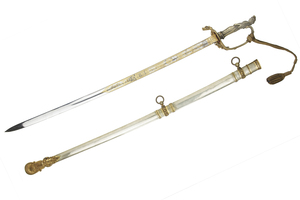 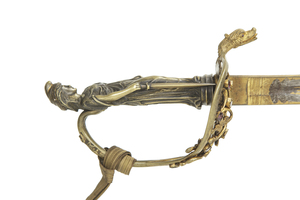 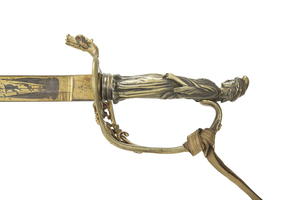 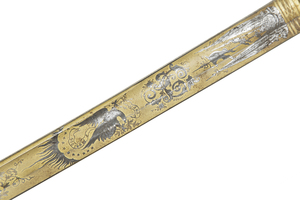 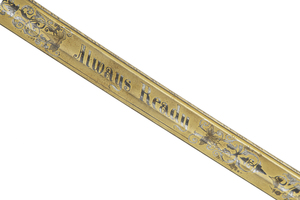 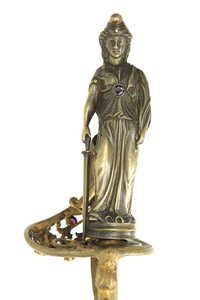 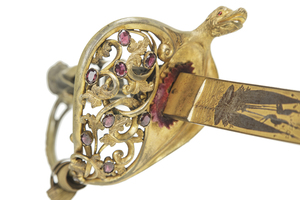 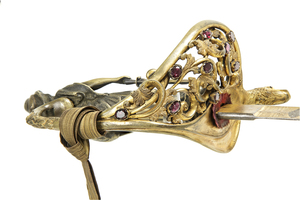 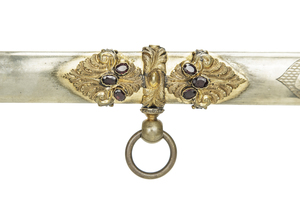 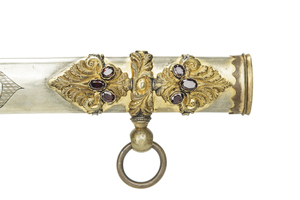 An extremely handsome presentation a sword with statuary figure of Liberty as the grip, in a garnet embellished scabbard with garnets set in the grip and guard, presented to 1st Lieutenant John W. Pryor, 81st Pennsylvania Volunteer Infantry, a veteran of the Mexican-American War.

The sword is a variant of the Model 1850 Staff & Field officer’s sword. The blade is Solingen made, with the Clauberg, Solingen stamp at the ricasso. The blade is beautifully etched, with the motto, “ALWAYS READY” in large bright letters against a heavy gold wash that is on the upper half of the blade.  There are also crossed flags and lances, a very handsome Union shield and flourishes on the same side of the blade. The other side has large cursive script letters, “U.S.” as well as an American eagle with a ribbon in its beak with “E Pluribus” on it, more flags and a gonfalon, and a larger ribbon with “E Pluribus Unum” on it, along with flourishes. The lower half of the blade is bright steel. The back of the blade is decorated with ivy vines, and has the words “Iron Proof” on it. The guard is heavily gilded brass, set with 8 garnets, among 3-dimensionl scrolls and leaves. The quillon appears to be a dragon’s head, with two tiny garnets as eyes. The grip is a brass statue of Liberty, wearing a Phrygian cap that was at one time gold plated. The statue itself was silver plated, but most of the silver plate is gone. She is holding a sword in her right hand, and has a garnet set in her chest. The base of the statue-grip is oval, and is turned at a 90 degree angle to the oval socket in the guard, such that it protrudes slightly over the oval socket in the guard. The scabbard was originally brightly gilded, but the gilding is largely gone from the steel body of the scabbard. The ornate mounts retain much of their original gilding, and the top and middle mount are each set with six garnets each.  The drag is of similar design, but has no garnets in it. The body of the scabbard is machine engraved with two large panels on the front, each having a finely done diamond pattern. The lower panel has 13 stars engraved at the top. The upper panel has a large scroll engraved on it, with the hand engraved inscription, “Presented to 1st Lt. John W. Pryor81st Penna. Vols. by the privates of Co. G. as a token of their regard and esteem. March 6, 1863.” The engraving retains the gold wash that was apparently over the entire scabbard originally. The engraving is exceptionally well-done, of a style that was not often used after the 19th century. Traces of the gold wash also survive behind the scabbard mounts. The sword has its original gilt officer’s sword knot.

Capt. John W. Pryor was a veteran of the 2nd Pennsylvania Volunteers in the Mexican-American War, having seen service at the Battle of Vera Cruz. He was age 35, living in Carbon County, Pennsylvania when he enlisted as 1st Lieut. in Company G of the 81st Pennsylvania on Sept. 16, 1861. With Company G, he saw extensive service, being wounded at Charles City Crossroads in Virginia during the Battle of Fair Oaks in the Peninsula Campaign, and again at Gettysburg. He had been promoted Captain and moved to Company D on May 1, 1863. Pryor was discharged on February 4, 1864 due to ill health, having served at many of the major engagements of the Army of the Potomac, including Fair Oaks, Antietam, Fredericksburg, Chancellorsville, and Gettysburg. He survived the War, returning to Carbon County, where he is buried in Union Cemetery in Weatherly, having passed away on October, 20, 1901 aged 75.

This is a very interesting sword, and is one of three known swords that are nearly identical in most of their particulars, including the style of their engraving, the presence and setting of the garnets, and the Liberty statue grip. These include one to Capt. Knox McAfee of the 12th New York, and another to Capt. Jacob W. Clark, of the 59th New York. All of these swords are of beautiful workmanship, with the exception of the statue hilt, which sits at right angles to the socket on the guard. They also have the appearance of having a bent quillon on Lady Liberty’s sword, which actually seems to have been cast this way. Likewise, a similar sword has been noted with the same basic grip, but on which there is no garnet, the quillon of Lady Liberty’s sword does not appear bent, and the base of the statue is smaller in size, more closely conforming to the socket in the guard. The workmanship on the statue grips is generally good, with some hand engraved details, and with fine casting on Lady Liberty’s separately attached Phrygian cap. The engraving on the scabbard has been very carefully examined, and does appear to be of the period in style- in fact being in a style that is virtually never attempted by modern engravers. John Thillman also shows a similar sword on page 493 in his later book, Civil War Swords. It is our opinion that this is an original sword that has been “improved,” whether at the time, or more recently, by the addition of the statuary grip. Capt. Pryor was an outstanding officer of distinguished service, and this sword appropriately memorializes his service, regardless of the origins of the grip. Dimensions 38 ½ inches long overall, with the blade being 31 inches long. Processing and shipping within the continental U.S. $60.00 plus 1.5% replacement cost insurance.

The blade is excellent, with a few old finger prints visible on the bright portion of the blade. There is very minor wear to the gold wash on the ricasso of the blade. The guard is slightly dulled, but retains most of its original gold wash, and the garnets are excellent. The scabbard is missing most of its gold wash, and appears to have been cleaned, such that there are few traces of the wash remaining on the steel body of the scabbard. There are two small ripple-like dents on the reverse of the scabbard by the throat. The engraving on the scabbard is excellent. The statuary grip shows some wear, and the gilding from the Phrygian cap atop the grip is almost completely gone. Likewise the silver plate on the rest of the grip is almost completely gone. The sword knot is darkened, but in about excellent condition.