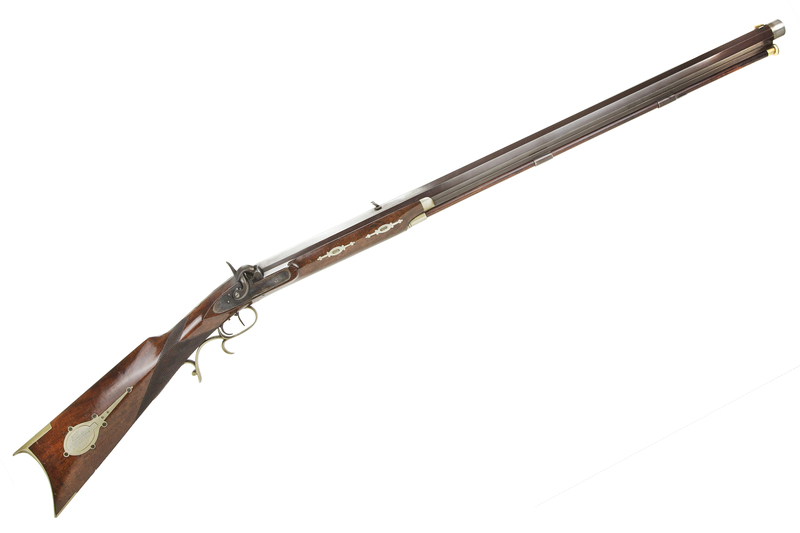 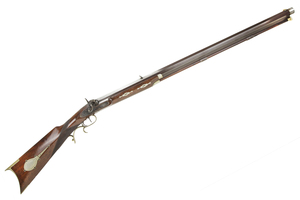 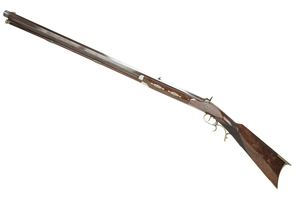 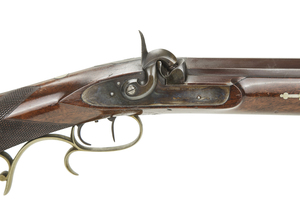 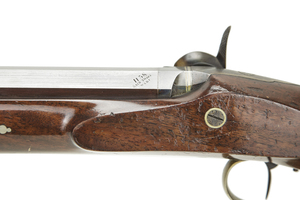 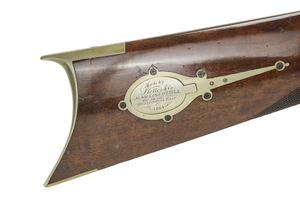 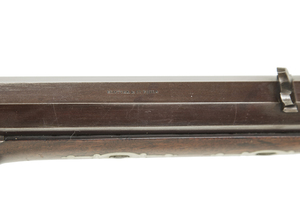 A truly superb exhibition grade rifle made by the famous firearms maker Slotter & Co. of Philadelphia as a prize for the Great Central Sanitary Fair of 1864, the largest and most spectacular of the various Wartime Sanitary Fairs, staged to raise money for sanitary and medical care for Union soldiers in the field. This in part helped lead to the founding of the American Red Cross.

The rifle is a spectacular example of the American gunmaker’s art, being of the general design of a plains rifle, but intended for target shooting, It has a gorgeous wooden half stock, handsomely checkered at the wrist, with German silver inlays around the key slots, as well as a German silver escutcheon plate at the wrist, and a German silver cap box on the butt. The buttplate and trigger guard are also German silver, as is the extension to the butt plate on the underside of the stock, and a small round escutcheon plate also on the underside of the butt. Parts of the gun are numbered “1.” There is also the number 1158 on the butt plate and the trigger guard, and the barrel. The barrel is heavy, octagonal, and deeply browned retaining all of its original finish. The top of the barrel is marked “Slotter & Co. Phila.,” as is the lock plate. The lock plate is brilliantly case-hardened. The patch box is engraved, “Made by Slotter & Co. No. 400 Lynd St. Phila. For the Great Central Fair.” The ramrod is highly polished hickory with a German silver head. There is a German silver covered false muzzle. The gun is .48 caliber, and appears never to have been fired, with deep rifling. The gun has double-set triggers, and is in perfect working order. The breech is stamped “1158 Gain Twist WARt.” The flat of the false muzzle is stamped, “Gain Twist WARt.” This is a truly outstanding rifle, and a significant artifact of the Great Central Sanitary Fair.

The Great Central Sanitary Fair at Philadelphia in 1864 was the largest fund-raising event ever held at the time, taking up the size of a small city, and had a central display hall of over 200,000 square feet. It had exhibits from every different type of business and industry, including themes about corn and sewing, a restaurant and parlor, as well as weaponry, fine art, curiosities, transportation and children's subjects. Numerous businesses, including Slotter, donated prizes that were raffled off as fund raisers.

On June 16, Abraham Lincoln and his family visited the fair. He donated 48 copies of the Emancipation Proclamation at $10 a book. They were all autographed by Lincoln. The festival raised over $1 million, the largest sum ever raised for charity at that time. Dimensions: 50 inches long overall, with a 33 inch barrel. Processing and shipping within the continental U.S. $75.00 plus 1.5% replacement cost insurance.

There is some light scratching on the butt stock on the front side. Otherwise, the gun is excellent, approaching mint. Witherell's strives to provide as much information and photographs as possible but encourages in-person inspection by bidders. Condition statements are only for general guidance and should not be relied upon as complete statements of fact and do not constitute a representation, warranty or assumption of liability by Witherell's. All lots are sold "AS IS" under terms and conditions. Please be advised we do not provide porters nor packing materials for pick ups. We do not accept credit cards.