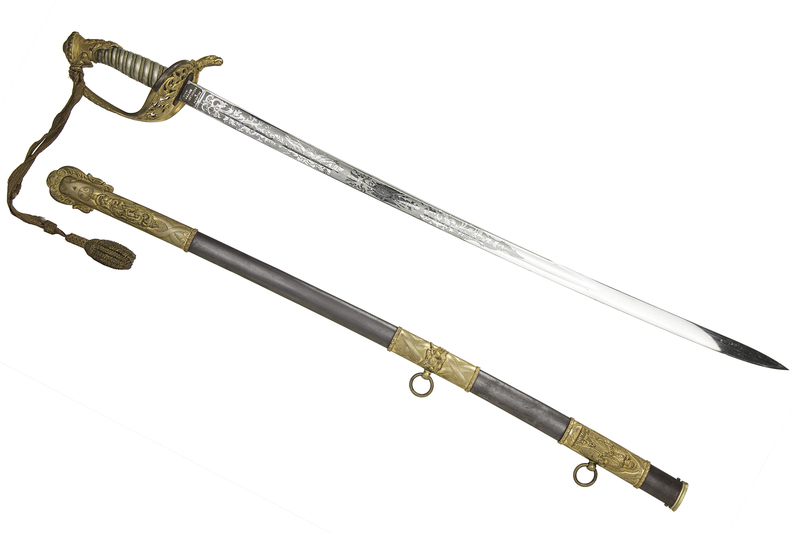 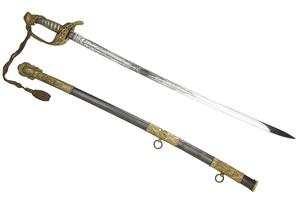 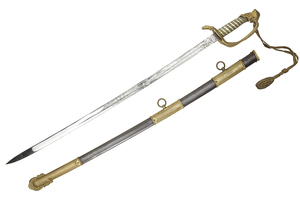 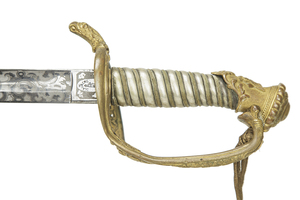 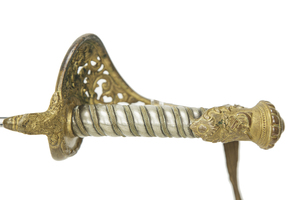 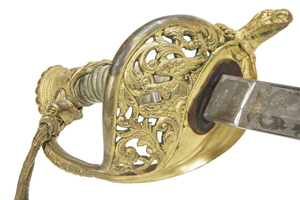 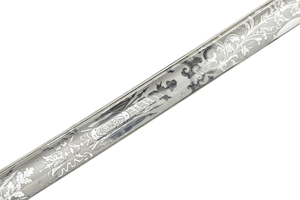 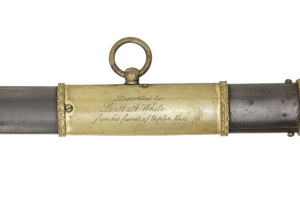 An exceptionally nice presentation sword with silver grip, an unique and highly decorative blade, a superb and interesting hilt of variant design, and a remarkable scabbard with mounts with large high relief figures on them.

The sword is of the basic form of an 1850 Staff & Field officer’s sword, but all of its elements are more decorative than the usual.  The grip is either silver, or heavy silver plate, wrapped with three strands of gilt wire. The pommel is larger than usual, and is decorated with a very handsome small eagle and shield in high relief casting on the front. The top of the pommel has a lobed surround below a band of floral decoration, below a raised oval. The guard is highly unusual and attractive: it has an eagle rising like a phoenix at the base. The eagle is clutching a Union shield to its breast. The eagle is flanked by floral designs that have had hand engraved details added. The quillon is a handsome eagle’s head. The scabbard mounts are heroic, with beautiful high relief figures and details: The throat has a standing figure of Liberty with sword in one hand, and a Union shield in the other. She is standing on a half-globe. The reverse of the throat has the presentation inscription: “Presented to Lt. .A. White from his friends of Upton, Mass.” The middle band has saltires at top and bottom. There is a high-relief trophy of arms in the center, including a bugle, drum, sword, arrows, and a streaming American flag. The drag is also heavily decorated, with a figure of a running officer with drawn sword, and an American flag in his left hand. The scabbard body is blues steel. The slightly curved blade is a beauty, with Clauberg on one side of the ricasso, and the rare retailer’s name of Palmer & Batchelders Boston Mass. on the other side. The etching is beautiful, with an eagle with a ribbon in its beak with “E PLURIBUS UNUM,” that echoes the eagle on the guard. It is about six inches below the hilt.  Below that is a large trophy of arms with fasces on top, with a Liberty cap, and a ribbon etched, “IN HOC SIGNO VINCES.” The other side of the blade has a very large horizontal “U.S.” on it. Closer to the hilt is a stand of American flags with a large Union shield in their midst. There are also floral vines and flourishes in the rest of the etched panels. The sword is complete with a handsome gilt sword knot.

Lieutenant Alonzo A. White was a “mechanic” from Upton, Massachusetts, aged 29 when he enlisted on Aug. 8, 1862 as 1st Sergeant of Company I of the 36th Massachusetts Volunteer Infantry. The regiment initially served in the Western Theater of War, and was present at the Siege of Vicksburg, during which Sgt. White was promoted to Lieutenant. Due to losses primarily caused by disease, the regiment was amalgamated with the 29th Massachusetts, and they were assigned to the 9th Corps of the Army of the Potomac. The fought at the Wilderness, and at Spotsylvania, where the regiment suffered particularly heavy casualties, including now 1st Lt. White. Who was discharged as a result of his wounds. Lt. White returned to Massachusetts, where he was an active member of the G.A.R. He died in Worcester, Mass. on April 14, 1905. Dimensions: 38 inches long overall, with the blade being 32 inches. Processing and shopping within the continental U.S. $60.00 plus 1.5% replacement cost insurance.

The blade is a sparkling beauty, with only the slightest signs of having been drawn on occasion. The scabbard body has an extremely faint patina of the lightest age. The gilt on the scabbard mounts is slightly faded. There is very slight rubbing to the gilt on the guard, as well as on the pommel. The grip is excellent. The sword knot shows slight wear, but still appears to be sturdy.