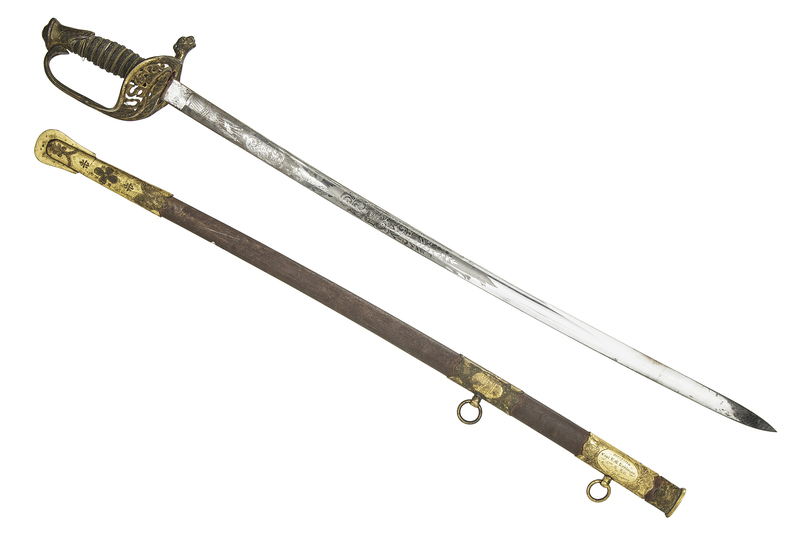 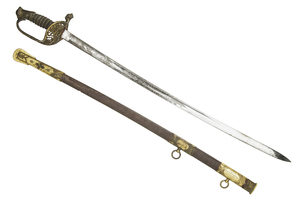 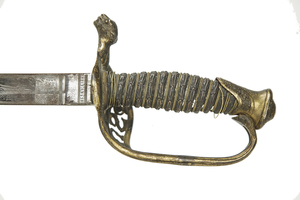 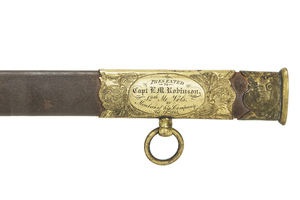 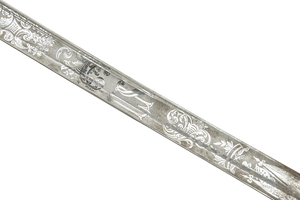 A very fine German made US Model 1850 staff and Field Officer’s sword and scabbard of presentation grade, and presented to Captain Edward M. Robinson of Anson, Maine, by the men of his Company of the 12th Maine Volunteer Infantry, in February, 1865. The sword is a variant of the standard pattern sword, with added embellishments, including a silver grip, a lion’s head quillon, ornate scabbard mounts with inscription, and a handsomely etched German made blade. The silver grip is very handsome, having spiral rows of laurel leaves as the rows and grooves of the grip. It is bound by gilt brass wire, some of which has become loose, although it is mostly still attached. The guard is a standard 1850 Staff & Field Officer’s, except for the addition of a very handsome and large lion’s head as the quillon. The scabbard is steel, with four gilt brass mounts: The throat is a larger than usual piece, with scrolls and florals. The top band is also larger than usual, with a large oval for the presentation inscription. It reads, “PRESENTED TO CAPT. E.M. ROBINSON, 12th Me. Vols. By Members of his Company, Feb. 14th 1865.” The engraving is particularly handsome, and was darkened in to enhance its appearance. The middle band of the scabbard is nearly identical, with a large oval with no added engraving. The scabbard drag is engraved with florals, a four-leafed clover-like design, and a series of rays and dots.

Edward M. Robinson was born in South Sebec, Maine, on Oct. 21, 1833. He served in the Maine State Militia, and enlisted in the 5th Maine Volunteer Infantry on its formation on June 24, 1861, at which time he was appointed 1st Sergeant of Company E. The regiment was immediately sent to Washington, D.C., and fought in the Battle of 1st Bull Run, suffering over 400 casualties, after which Robinson was promoted Lieutenant. As part of the newly formed Army of the Potomac, the regiment fought in the Peninsula Campaign, during which Robinson was promoted to 1st Lieutenant. The regiment then fought at South Mountain and Antietam, following which Robinson took command of Company C of the regiment. Promoted Captain, he participated in the Battles of Fredericksburg and Chancellorsville. As part of Slocum’s Division of the Sixth Corps he participated in the Battle of Gettysburg, the regiment only fielding 340 men at that time due to casualties and sickness. They fought in the Wheatfield, suffering no casualties, but capturing 200 Rebel prisoners and the flag of a Georgia regiment. The regiment continued to serve in the Army of the Potomac in 1864, during which it fought in the Wilderness. During that battle Captain Robinson was shot through both knees. He recovered in time to fight at Cold Harbor, after which the regiment, finishing their three year enlistment, was mustered out of service. Captain Robinson along with much of his company joined the 12th Maine Veteran Volunteers as part of the Army of the Shenandoah, under General Sheridan. The 12th Maine mustered out of service on April 18, 1866.

There are at least three known photographs of Lieutenant, later Captain Robinson in uniform. Dimensions: The sword is 39 ½ inches long overall, with a 31 ¾ inch blade. Processing and shipping within the continental U.S. $60.00 plus 1.5% replacement cost insurance.

Very good, but with heavy tarnish to the silver of the grip. The steel of the scabbard body is lightly rusted overall. The gilt mounts are very fine, but other than the mount with the inscription, they are unpolished. The throat is missing a screw. The blade is excellent overall, but has a light frosting of rust on the back of the blade by the hilt. The rest of the blade is in a brilliant and beautiful state of polish. The hilt has a minor dent in the basket by the “S” of the “US.” The wire wrap to the grip is loose both at top and bottom, but all seems to be present.