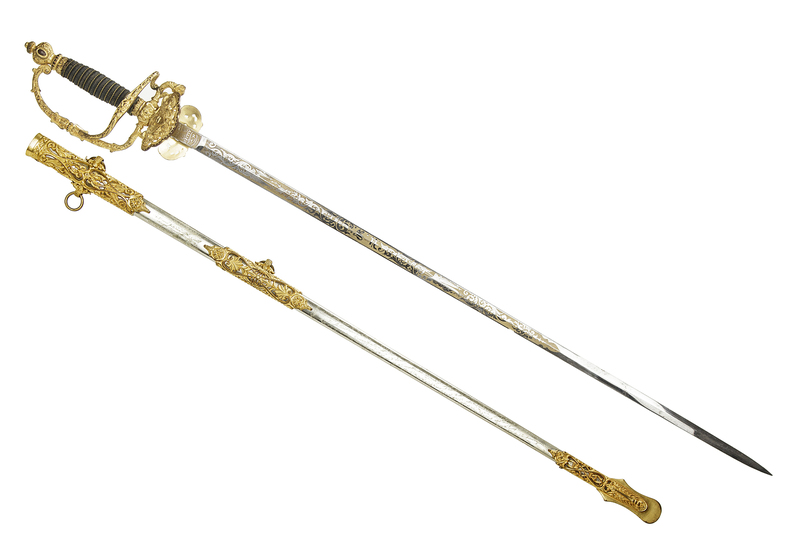 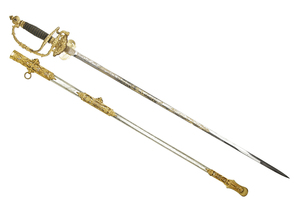 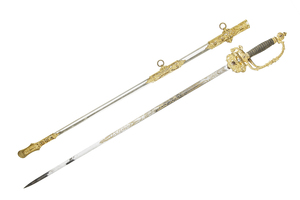 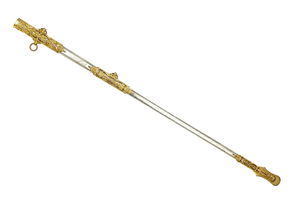 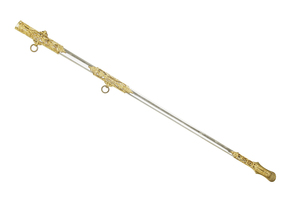 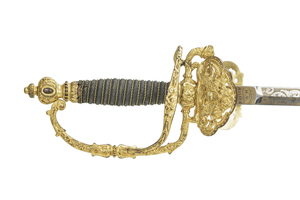 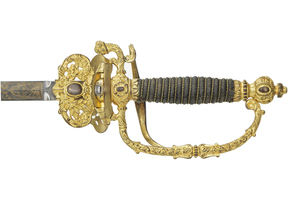 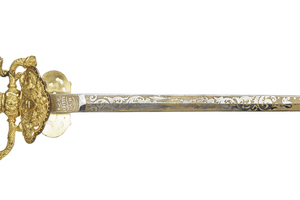 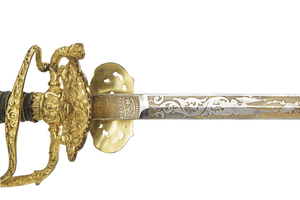 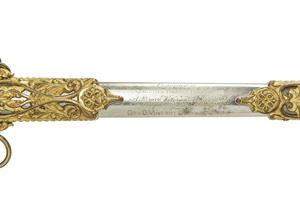 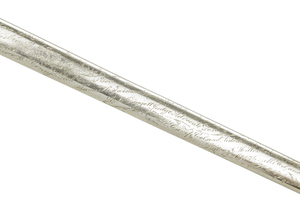 A genuinely remarkable presentation 1860 Staff & Field officer’s sword of variant form, with 12 signatures etched into the scabbard, to Col. Henry H. Adams, from the Governor of Connecticut and his military staff. The sword is of the basic form of the 1860 Staff & Field officer’s sword, but is more ornate in every particular, as well as having an extra branch to the guard. The sword has a large olive shaped pommel with ornate casting and a very fancy capstan nut on top; a sharkskin grip in dark charcoal grey, with gilt twisted wire wrap; a beautiful pierced down-turned guard and folding counted guard, the front guard having a handsome US eagle with Union shield on its breast, surrounded by florals and bands of stars; three heavily gilt and ornately cast mounts on an apparently chromed scabbard, the mount designs being largely florals, with three rings; The blade is gold washed, and has the name of H.V. Allien& Co., New York on the ricasso, with florals, crossed American flags, trophies of arms, and a small American eagle on it; but the real star of the show is on the body of the scabbard, with the following presentation engraved between the top two bands: “Presented to Col. Henry H. Adams. Brave Veteran Soldier, and Loyal American Citizen, Gov. O. Vincent Coffin and Staff.” Below the middle mount are the date Aug. 1896, and the engraved signatures and ranks of twelve high ranking officers of the governor’s military staff, including Major General Charles Graham, Quarter Master General William E. Disbrou, Surgeon General Austin Brown, Commissary General Henry Peck, Paymaster General James H. Farmer, Judge Advocate General L.H. Dagget, Col. C.L. Camp, Col. Watson J. Miller, Col. H.W. Wessels, Asst. Adjutant General W.E. F. Sanders, Asst. Quartermaster General L.R. Cheney, and Captain S. Milton Thompson, U.S.A.

Henry Herschel Adams was the grandson of President John Quincy Adams, and great-grandson of second President and founding father of John and his wife, Abigail Adams. He was born in Ohio in 1844and orphaned at age 12. He managed to continue his education, and at age 16 founded and led a Student Volunteer unit of Ohio State Militia. In April of 1861 he enlisted as a private in the 125th Ohio Volunteer Infantry, part of the Army of the Cumberland, in which unit he fought in a number of the most significant battles of the Western Theater of War, including Chattanooga, Chickamauga, Missionary Ridge, the March to the Sea, and Resaca, where he was mentioned in dispatches for courage under fire. He was captured in September, 1864, and spent several months in Cahala, a part of the Andersonville complex. He was exchanged in December, and promoted to Lieutenant, and recommended for the Medal of Honor (which he did not receive) by General O.O. Howard.

After the War he became involved in mining, coming to own two iron companies and a copper mining company, as well as his own railroad. He was a great patriot, and established an organization to fund putting an American flag in every school classroom in the United States, and helped start what became the national program of R.O.T.C. Moving to Connecticut he enlisted as an officer in the Connecticut Nation Guard, where he achieved the rank of Colonel. On outbreak of the Spanish-American War he raised a brigade of Volunteers at his own expense, and offered their and his services to the Governor of Connecticut. He retired from the National Guard in 1904, and died in 1915. In turn of the century America, he was one of the wealthiest and most influential men in the country. He was a tremendous benefactor to George Washington University, along with his friend Walt Whitman, and was a member of the G.A.R., the Patriotic Order of the Sons of America, and the Sons of the American Revolution. Dimensions: The sword is 40 inches long overall, with the blade being 31 ½ inches. Processing and shipping within the continental U.S. $60.00 plus 1.5% replacement cost insurance.

The sword is in excellent condition overall. The presentation inscription between the top and middle bands is somewhat rubbed, with some of the chrome plating missing. Witherell's strives to provide as much information and photographs as possible but encourages in-person inspection by bidders. Condition statements are only for general guidance and should not be relied upon as complete statements of fact and do not constitute a representation, warranty or assumption of liability by Witherell's. All lots are sold "AS IS" under terms and conditions. Please be advised we do not provide porters nor packing materials for pick ups. We do not accept credit cards.