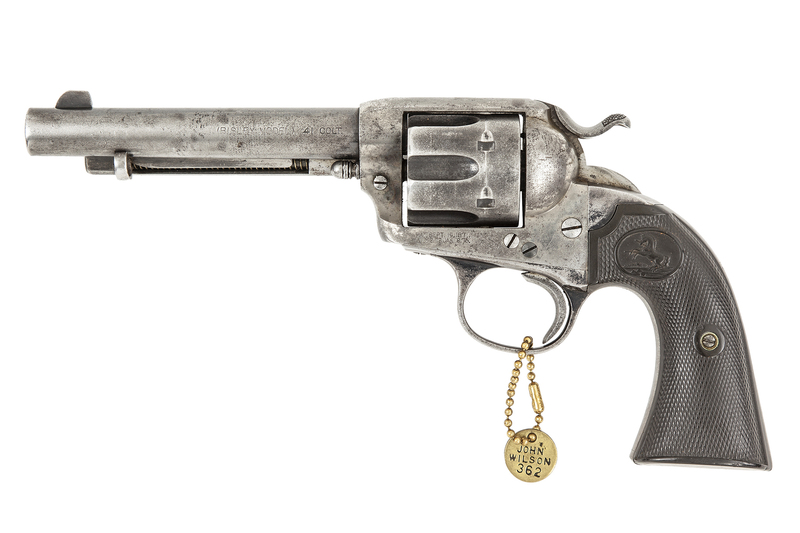 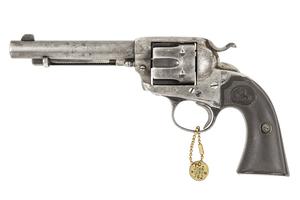 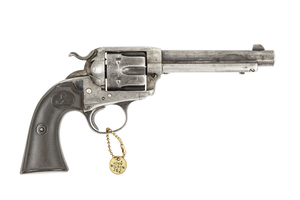 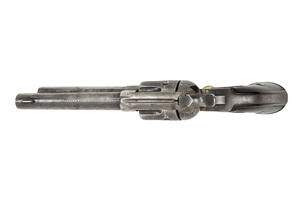 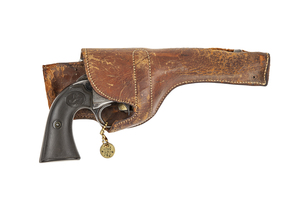 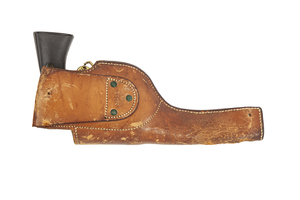 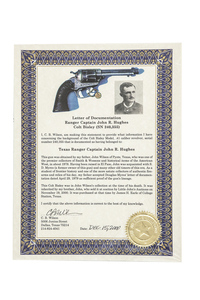 Provenance: recovered from the body of Juan Carrozco by Hughes near Ysleta, TX; traded by Hughes to S.D. Myers some time later, as payment for a saddle (letter of Myers’ nephew Douglas dated April 29, 1978); by descent to Myers’ brother C. Lee, thence to Douglas Myers; sold to collector John Wilson of Pyote, TX; by descent to his son John Wilson, who cosigned this and other items from his father’s collection to auction, where it was purchased on November 19, 2000, by Jim and Theresa Earle.

Texas Ranger John R. Hughes became a working cowboy in Texas at the age of 14, before heading west into Indian Territory learning much of the language and culture of the Choctaw and Osage Indians, and later the Comanche. He first worked as a Ranger in 1887 at the age of 31, and would spend most of his years as a Captain of the Frontier Battalion, until his retirement in 1915. Zane Grey’s 1915 Lone Star Ranger was dedicated to Hughes, and many assert that he was the inspiration for the iconic masked man, The Lone Ranger.

Douglas Myers explains the history of the gun in his 1978 letter: “The story as related to me by ‘Tio Sam’ [S.D. Myers], was that Capt. Hughes had disposed of, in the act of apprehension, a Mexican bandit by the name of Juan Carrozco, near Ysleta, Texas.  And that this Colt’s pistol was in the hands of said bandit at that time.” S.D. Myers owned a saddlery in Sweetwater during the early part of the 20th century, and Douglas Myers confirms that Hughes traded this gun to S.D. Myers for a new saddle.

We do not sell post 1898 firearms to California residents unless they have a valid FFL or Relic and Curio license. Old West Gun Room in El Cerrito, CA will handle all in state and out of state transfers. His fees are $100 per gun plus any applicable shipping charges. By purchasing this lot you agree that you will be solely responsible for compliance with all applicable Legal Requirements governing the purchase, sale, transfer and shipping of Firearms. The Firearms must be shipped only to a Federal Firearms License holder (“FFL Holder”). You must transmit a copy of your (or your FFL Holder’s) license to the seller before the Firearms can be shipped. You must make arrangements with an FFL  Holder before placing a bid. It is very important that you contact an FFL Holder before placing a bid in order to verify the complete cost of the transfer, the legality of the item in your area, and to make sure you qualify to pass any required background checks. “Firearms” shall have the meaning provided under the Gun Control Act of 1968, 18 U.S.C. 101 et seq. “Legal Requirements” means all applicable legal requirements for the sale, transfer and transport of the item, including but not limited to statutes, regulations and/or requirements of any country, state locality, province, municipality or other government authority or regulatory entity regarding sales or auctions, the sale and/or transfer of the item, export or import control, taxation, duties or tariffs, and licensing of brokers and dealers.

Very good. No finish remaining. Grips with minor rubbing. Witherell's strives to provide as much information and photographs as possible but encourages in-person inspection by bidders. Condition statements are only for general guidance and should not be relied upon as complete statements of fact and do not constitute a representation, warranty or assumption of liability by Witherell's. All lots are sold "AS IS" under terms and conditions. Please be advised we do not provide porters nor packing materials for pick ups.