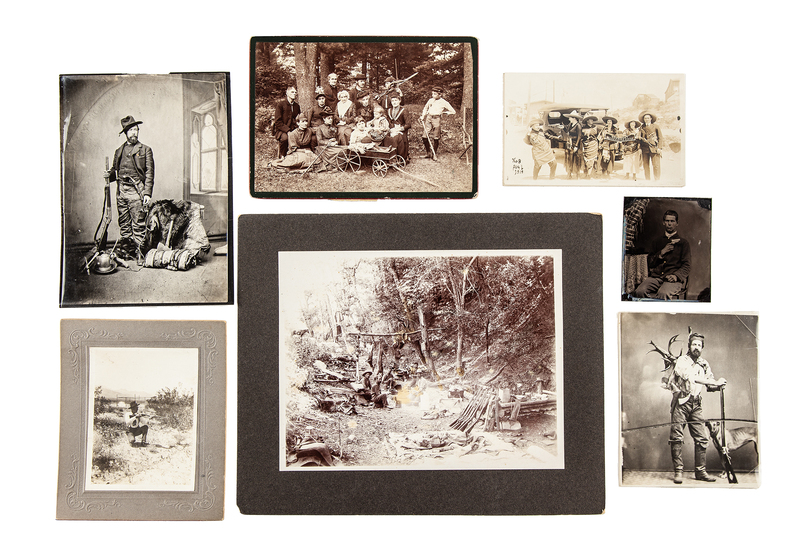 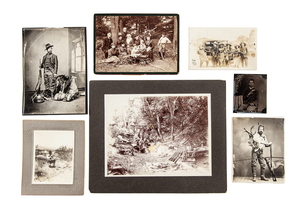 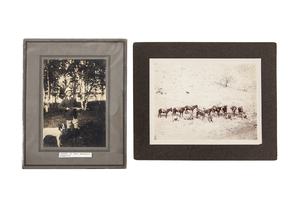 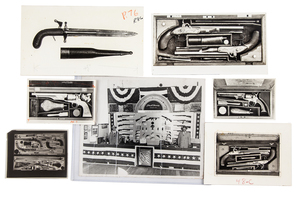 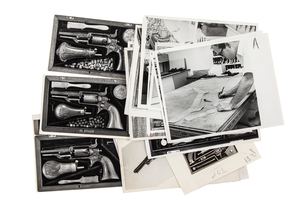 9 period images of people with old guns, swords, along with a number of modern (circa 1950) photos of fine guns.

A tintype ninth plate image of a Civil War soldier in sack coat with pork pie hat on table at his side, holding a 4-barreled Sharps pistol.

An albumen print paper photo of a man equipped for the frontier, with an 1866 Winchester rifle in hand, and an 1842 Aston type percussion pistol in his belt. He has a blanket roll and furs stacked next to him.

2 Real Photo postcards of a group of tourists dressed as Mexican “bandidos,” in front of an old car, dated 1919. They have sombreros, and serapes, and a variety of Civil War revolvers, including an 1858 Remington, two 1860 Colt Army revolvers, and an 1851 Colt Navy. Two of the people are holding a cloth sign reading, Boundary Mexico & United States.”

A cabinet card portrait of a family with two boys wielding swords, and a bayonetted rifle and 1842 Aston style pistol. One of the women is holding a white kitten. There are labels on the reverse saying that the image was taken in Sept. /89 by Hubbell Fisher. There is more that is not legible.

A cabinet card photo of a man kneeling, firing a Colt Lightning pump-action rifle, or similar rifle. It is faintly labeled Eastern Oregon.

A Placer County albumen print photo of a man dressed as a frontiersman, with old percussion rifle, powder horn, military style percussion revolver holster on his belt, tall boots, and a dog at his side. There is an extensive and largely illegible inscription on the reverse. It appears that this is an old copy of a broken ambrotype. There are mentions of Dutch Flat, and Grass Valley.

A large matted albumen print of a man and dog in the field, the man holding an auto-loading rifle. Mr. Buxtun has added a humorous label.

A large matted albumen print photo of a group of men with horses and a dog, the men rifles including what is clearly an 1876 Winchester, while another man has an 1873 Winchester, and others holding 1892 or 1894 Winchesters. The reverse of the image is stamped S.C. Edwards, Fillmore, California.

Another large matted albumen print photo, possibly of the same group of men as in the previous image, this time clustered around a camp fire with two deer and a mountain lion hanging from a frame behind them. Their rifles are lined up nearby, along with cartridge belts and knives. This image is also stamped S.C. Edwards, Fillmore, California.

A modern photo of a display of guns by the Caddo Parish Sheriff’s Department, including a Thompson submachine gun, a B.A.R., and a variety of pistols, rifles, shotguns, and flare guns.

35 modern (1950’s and ‘60’s) photos of rare antique guns, knives, and holsters making, many from Guns & Ammo Magazine and marked for editing. Dimensions: Varying. Some are 10 by 8 inches. They range downward to the tintype, which is 2.5 by 3 inches. Processing and shipping within the continental U.S. $30.00 plus 1.5% replacement cost insurance.

Most of the photos are excellent. One of the photos from Fillmore, California has a yellow spot in the center. The photo of the gun display by the Caddo Parish Sheriff is wrinkled.Witherell's strives to provide as much information and photographs as possible but encourages in-person inspection by bidders. Condition statements are only for general guidance and should not be relied upon as complete statements of fact and do not constitute a representation, warranty or assumption of liability by Witherell's. All lots are sold "AS IS" under terms and conditions. Please be advised we do not provide porters nor packing materials for pick ups. We do not accept credit cards.