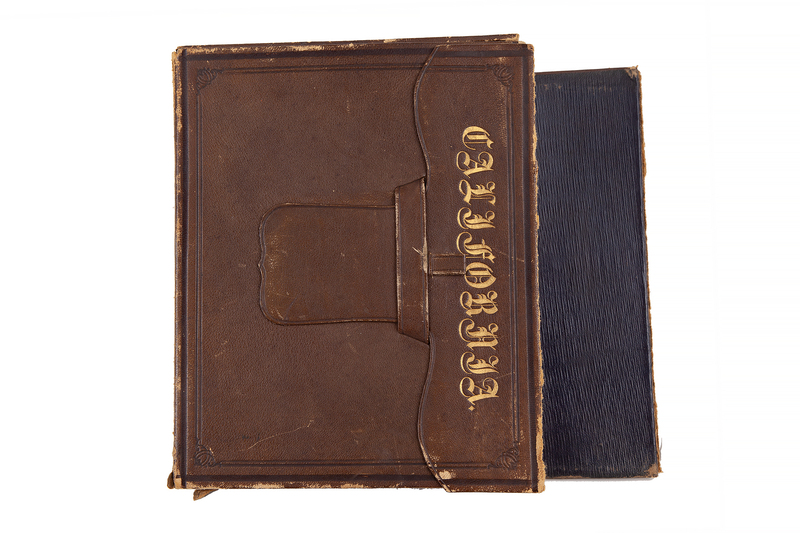 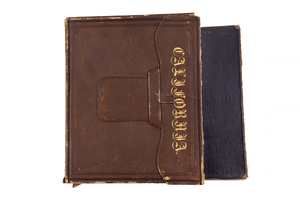 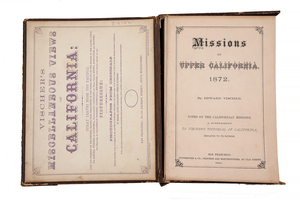 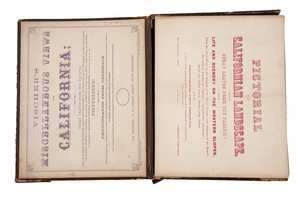 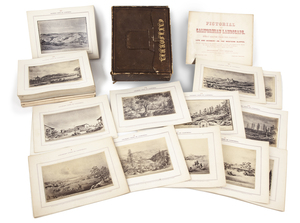 Edward Vischer. Pictorial of California Landscape. Stray Leaves from the Pacific! Life and Scenery in the Western Slopes, from the Coast Range to the Summits of the Sierra Nevada, and Glimpses of the Desert; the Natural Wonders of California; Characterist

[Divisional title] Vischer's Pictorial of California. Sixty Views of Californian Landscape. [Divided into 12 segments, each with a separate card with the title; photographs mounted on heavy board.]

Last owned by C.K. McClatchy, this portfolio is a unique gathering of artist Edward Vischer's photographs of his documentary drawings of California scenes that he made between 1858 and 1867. Simply put, it is one of the most ambitious works generated during the pioneer days of California book production and serves as an important early example of using original photographs to illustrate a publication. Like with his earlier work on the Mammoth Tree Grove (see below). Vischer planned to reproduce his drawings via lithography. However, several stones broke and he decided to employ the relatively new medium of photography. Moreover, he did not have to rely on another artist to copy his drawings in reverse on a lithograph stone as he did with the Mammoth Trees. All the images housed in this especially-made box are actual photographs printed from glass plate negatives and painstakingly mounted on heavy paper. Each of the sixty plates in the first section includes a printed caption and copyright date of 1863. To obtain the photographic reproductions of his sketches, he contracted with well established San Francisco photographer George H. Johnson. In analyzing the McClatchy portfolio, one must agree with the esteemed bibliographer, Robert E. Cowan who noted that "few copies contain precisely the same number of plates." In promoting this beautiful but complex pictorial, Vischer printed a prospectus advertising the work in four formats with between 100 and 120 plates. The McClatchy copy is further enriched with an additional group of forty one plates. Moreover, this particular copy comes with a rare wrapper bound book by Vischer titled Missions of Upper California. Given its publication date of 1872, it must have been added later. An examination of Vischer's Pictorial reveals that on a very limited basis he added the work of other well established California artists including Thomas Hill and Thomas Ayres. These appeared in the "Supplement". He also added an original albumen photograph of a "Nugget of Gold" taken by Carleton E. Watkins, California's premier nineteenth century photographer. Another image is a beautiful oval shaped anonymous photograph of the steamships Chrysopolis and Cornelia at dock. Two of the plates are reproductions of wood engravings of California mining from The Miner's Own Book published by Hutchings & Rosenfield in 1859 (see above).