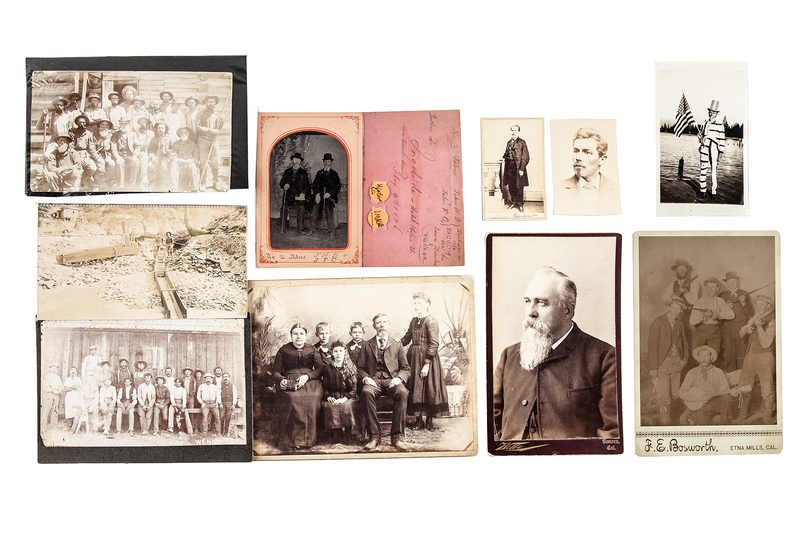 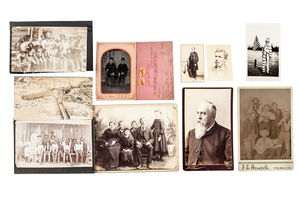 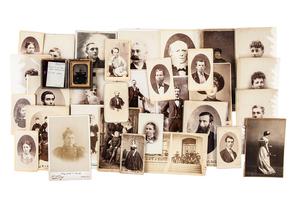 A cased ninth plate ambrotype of Kitty Wilson Bell, about 6 months old, of Sonora in 1858, in a diary case with brass clasp and split hinger.

Paper matted half-plate tintype of two men in suits with bowler hats and walking sticks identified as “The 2  Johns, JHB and JFC, with notes that the image was taken at the Ingleside Hotel on “Febry. 9th, 1896,” saying that the two men had been partners and had packed over the Sierra Nevadas to Washoe in 1860.

A CDV of a woman identified as Kate Delmore, later Mrs. B.F. Williams of Oakland, Cal. taken in San Francisco 1862.

A group of 6 CDVs, clearly a family, done by J. Pitcher Spooner, in Stockton, California and by W. Brown in Modesto, showing a mother and father, two young women probably sisters, a young man who does not appear to be related, and a boy. The young women appear to be wearing pearl chokers.

A single CDV of a young womanby J. Pitcher Spooner of Stockton.

A single CDV of a bearded man, the image having rounded corners, done by Halsey & Coffin of Dutch Flat, Cal.

A glamorous heavy cabinet card by Miss Bisbee of Berkeley, California, of Carol Day, May, 1900, a beautifully dressed young woman contemplating a rose.

A cabinet card of an attractive young woman identified as Mamie E. Stoffels, by Stockley of Napa.

Cabinet card photo of a man with a long beard by Williams of Woodland, California.

Cabinet card photo of six men armed with 5 guns and a banjo by F.E. Bosworth of Etna Mills, California.

2 cabinet card photos, one of 6 young women the other of an older man, both by Charles W.J Johnson of Watsonville.

CDV by H.H. Frye of Chico, California of a distinguished Californio gentleman.

Cabinet card photo of a man with a huge moustache identified as M.A. Leonard, by Dames of Oakland, California.

Fine cabinet card photo of an unusual looking man with a long beard, wearing a duster or some other sort of less usual coat, by Frye Brothers of Grass Valley, California.

Large matted albumen print of family group of six, with mother-in-law, husband and wife and three children including possible twin boys and girl with long hair.

Cabinet card photo of a group of 20 well-dressed men on a house porch by Strong of Oakland, California.

Matted albumen print photo of small mining operation with six miners and sluices, identified as being the Slate Creek Gravel Gold Mining Company in 1896, north of Downieville, near Alturas Mine, in Sierra County, California. The photo is identified as being by Gustave H. Schubert, Nelson Point, Cal.

Very interesting matted albumen print photo of a group of 18 men and boys, some dressed as cowboys, one is clearly a cook, and one having a border collie at his feet, posed in front of a barn-like building.  Dimensions: Varying. The cabinet cards are generally 4.25 by 6.25 inches, with some larger. Processing and shipping within the continental U.S. $30.00 plus 1.5% replacement cost insurance.

The majority of photos are excellent. The portrait of Edith Cumberson is darkened with age. Some are very slightly faded.  Witherell's strives to provide as much information and photographs as possible but encourages in-person inspection by bidders. Condition statements are only for general guidance and should not be relied upon as complete statements of fact and do not constitute a representation, warranty or assumption of liability by Witherell's. All lots are sold "AS IS" under terms and conditions. Please be advised we do not provide porters nor packing materials for pick ups. We do not accept credit cards.