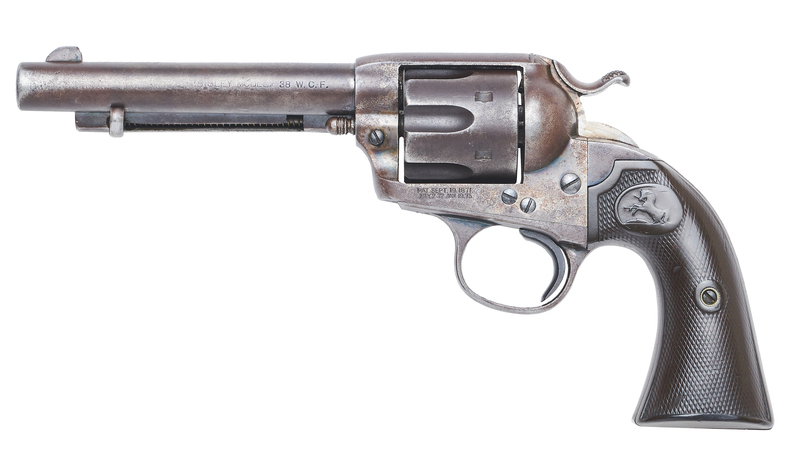 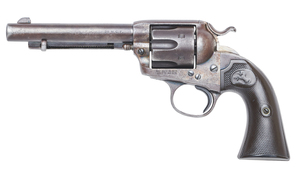 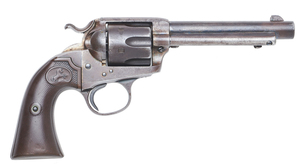 Provenance: gift of Cole Younger to Pauline Younger, wife of his cousin (affidavit dated 1943); sold to Richard Riss II, in 1943 and exhibited by him at How the West Was Won Memorial Museum in Custer City, SD until its liquidation sale, September 12, 1973; purchased by John J. Kennedy of Atlantic Beach, FL; sold to Jim and Theresa Earle, February 1991.

The 1943 affidavit by Pauline Younger reads: “that Thomas Coleman (Cole) Younger, brother of Jim, Bob and John, sons of Judge Harry Younger of Lees Summit, Missouri resided with his cousin Marcus Coleman (Scout) Younger at intervals from 1906 until his death in 1916 and presented me, Pauline Younger, wife of Scout Younger, with his gun a Colt .38 Cal. Bisley model #194,564 for a keepsake.  This gun has been in my continuous possession from 1906 to this date.”  Present also is a second affidavit of Edwina Lee Henry testifying to the truthfulness of Pauline Younger’s statement.

Cole Younger was a Bushwacker with William Quantrill and Bloody Bill Anderson during the Civil War. After the war, he and his brothers robbed banks with Jesse and Frank James. In 1876, Younger and his brothers, Jim and Bob, were captured after the failed attempt to rob a bank in Northfield, Minnesota. They were sentenced to life in prison at the Minnesota Territorial Prison in Stillwater. Cole Younger was pardoned in 1901 and spent his last years monetizing his fame, writing a memoir and embarking on a lecture tour with Frank James.  During those final years, he lived at least part time at his cousin’s house, and at some point gifted this gun (which he could only have acquired after his pardon, since it dates from 1900) to his cousin’s wife. We do not sell post 1898 firearms to California residents unless they have a valid FFL or Relic and Curio license. Old West Gun Room in El Cerrito, CA will handle all in state and out of state transfers. His fees are $100 per gun plus any applicable shipping charges. By purchasing this lot you agree that you will be solely responsible for compliance with all applicable Legal Requirements governing the purchase, sale, transfer and shipping of Firearms. The Firearms must be shipped only to a Federal Firearms License holder (“FFL Holder”). You must transmit a copy of your (or your FFL Holder’s) license to the seller before the Firearms can be shipped. You must make arrangements with an FFL  Holder before placing a bid. It is very important that you contact an FFL Holder before placing a bid in order to verify the complete cost of the transfer, the legality of the item in your area, and to make sure you qualify to pass any required background checks. “Firearms” shall have the meaning provided under the Gun Control Act of 1968, 18 U.S.C. 101 et seq. “Legal Requirements” means all applicable legal requirements for the sale, transfer and transport of the item, including but not limited to statutes, regulations and/or requirements of any country, state locality, province, municipality or other government authority or regulatory entity regarding sales or auctions, the sale and/or transfer of the item, export or import control, taxation, duties or tariffs, and licensing of brokers and dealers.

Very good. Dark gray patina overall with traces of color on frame. Grips worn. Witherell's strives to provide as much information and photographs as possible but encourages in-person inspection by bidders. Condition statements are only for general guidance and should not be relied upon as complete statements of fact and do not constitute a representation, warranty or assumption of liability by Witherell's. All lots are sold "AS IS" under terms and conditions. Please be advised we do not provide porters nor packing materials for pick ups.