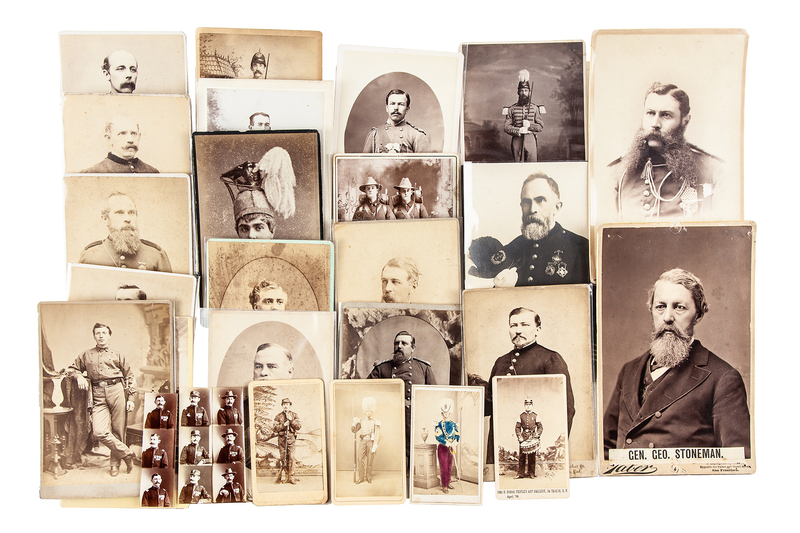 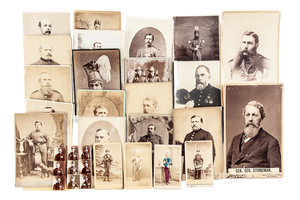 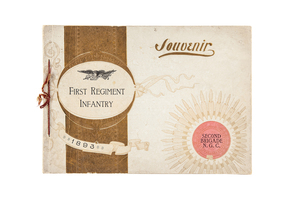 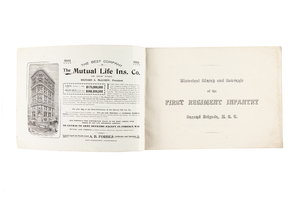 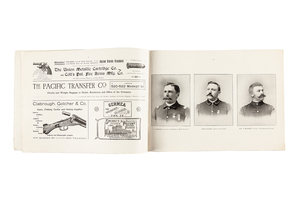 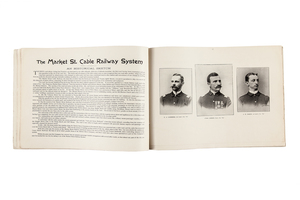 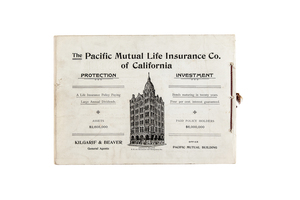 A very rare grouping o early California soldiers, primarily of the State Guard, along with some Turners from San Francisco, as well as some famous soldiers of the period photographed in San Francisco.

A souvenir booklet of the First Regiment of Infantry, National Guard of California, in 1893, including fine portrait photos o all o its officers, in excellent condition.

CDV of a California German style unit’s drummer in spiked helmet, with German style drum and swallows’ nests on his shoulders by Godens of San Francisco.

CDV of a California soldier in unusual uniform with tall white bearskin hat, by Perkins of Vallejo.

A similar CDV but of a sergeant, colored by hand, with 1840 NCO sword, by Smith of Vallejo.

A terrific cabinet card photo of a California Guardsman with “CG” belt plate, and a European made Artillery short sword on his belt, wearing an interesting short with three rows of buttons, by Edouart & Cobb o San Francisco.

A fine cabinet card photo of a California Guardsman, probably a Turner, holding his slouch hat, with powder horn slung, with medals by Lange of San Francisco. There is an extensive inscription in faded pencil on the reverse.

A similar cabinet card of a possible Turner in the California Guard, holding his hat with a badge on his chest, by Lane of San Francisco.

Similar cabinet card by Lange of man in grey uniform, but same hat as others, with medal on his chest and an unusual belt buckle.

Cabinet card photo of Maj. Gen. Geo. R. Vernon, California National Guard, 1876, by Bradley & Rulofson, San Francisco. The city of Vernon in Los Angeles County is named after him. He was a Civil War Veteran who had enlisted in the 6th New York Militia, then in the 14th US Infantry, rising to the brevet rank of Captain. He then came to California where he became a significan political and military figure, rising to the rank of General in the California National Guard.

Cabinet card photo of cavalry officer identified in pencil on the back as William W. Cooke, 7th Cavalry, who died at Little Big Horn. The subject has huge Dundreary sideburns with cavalry aguilette on his chest. The photo is by Taber of San Francisco. Taber only opened on Montgomery in 1875, so the date seems to suggest that this might be a different officer.

Cabinet card photo of a California National Guardsman in frock coat and 1881 spiked helmet with Trapdoor Springfield rifle and bayonet, by Griffith’s studio in Marysville, California.

Cabinet card photo of an officer with presentation grade sword, circa 1880, with banjo epaulets, by Bradley & Rulofson, San Francisco.

Cabinet card photo of soldier in 5-button coat with slouch hat in hand, by Holler of San Francisco.

Cabinet card phot of California Guard officer in white frock coat with full epaulettes and gorget. There is a faint pencil inscription on the reverse.

Cabinet card photo of General George Stoneman in civilian dress. He commanded “Stoneman’s Raid, which devastate 150 miles of Confederate railroad towards the end of the War. Photo by Taber, of San Francisco.

9 small photos of US officers by Ishiguro of San Francisco. Dimensions: Most images are cabinet cards, 4.25 by 6.5 inches. The souvenir book of the 1st California is 11.25 by 7.75. Some cabinet cards are larger than usual. CDVs are generally 2.5 by 3.75 inches.

The overall condition is excellent, with minor fading on one image. Witherell's strives to provide as much information and photographs as possible but encourages in-person inspection by bidders. Condition statements are only for general guidance and should not be relied upon as complete statements of fact and do not constitute a representation, warranty or assumption of liability by Witherell's. All lots are sold "AS IS" under terms and conditions. Please be advised we do not provide porters nor packing materials for pick ups. We do not accept credit cards.