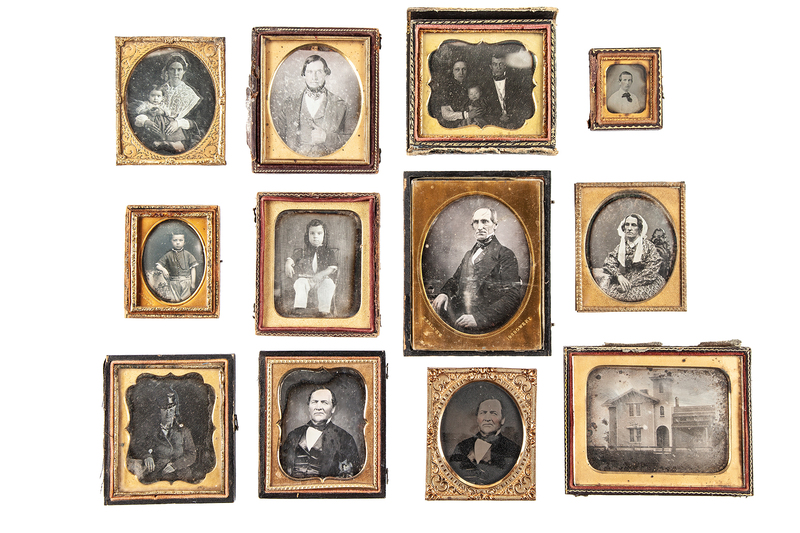 A fine daguerreotype portrait of an older gentleman of apparent wealth, by E. Balch’s Studio, 123 Bowery in New York. Eliza Balch was in business as a photographer at this address from 1857-1860. She was a noted female photographer who took over the business from her husband on his death. In 1860 her two sons took over. The name and address are stamped on the matte. The portrait shows a somewhat fierce looking man in his fifties. It is in a half leatherette case, but matte, image and glass are all loose. The image is slightly faded, but remains clear. There is a scratch across the subject’s nose. 3 ¼ by 4 3/8 inches.

Daguerreotype portrait of Daniel Lutz with the date 1876. The significance of the date is unclear, since the image is clearly pre-Civil War. It may be the date of his death. There were three men named Daniel Lutz who served in the Union Army in the Civil War and survived, two from Pennsylvania, and one from Missouri. The image is in a full leatherette case with the lining missing from the lid. It is 2 ½ by 3 inches. The image is faded but still visible.

Daguerreotype portrait of a young couple with baby. They look fairly stern, and the wife appears to be in mourning, but the baby is alive. It is mounted in a “book” style case with the title “Memory Leaflet” stamped in gold on the spine. The case has the lid separated from the body. The image is faded but still visible. 3 ¼ by 2 ¾ inches.

Daguerreotype portrait of a boy with his hair in corkscrew curls, but dressed in white trousers and a dark shirt with a toy sword on his lap. The image is in a weak half case, and is 2 5/8 by 3 ¼ inches. An interesting image.

Small daguerreotype portrait of a man, possibly a sailor in white shirt and large black tie. It is in a leatherette case with separated hinge. 1 ¼ by 1 ½ inches. Very cler and sharp image of unusual size.

Two identical portraits of Josiah Kilburn, a middle-aged man in satin vest, coat and tie. One is a daguerreotype, the other a tintype of the same image. The tintype is in a particularly nice gold matte, with no case. The daguerreotype is in a leatherette case with separated hinge and no pad. These are both very good images, 2 ½ by 3 inches. This is probably the Josiah Kilburn of Littleton, New Hampshire, born in 1801 and died in 1888.

An unusual daguerreotype portrait of a man wearing a rubberized or lacquered wheel hat. He is wearing an ill-fitting coat, and may be a returned soldier. The back of the image holds a small strip of cloth, possibly a memento. The image is in a half case, is slightly faded, and is 2 ¾ by 3 inches.

A very interesting and rare daguerreotype image of a house, or possibly a small church, with a three story tower. The image is in a leatherette case with separated hinge and different designs on front and back. It is reasonably clear, slightly faded with spotting around the edges. 4 by 3 3/8 inches. The glass may be a modern replacement, and is loose in the case.

3 daguerreotype portrait: one of an older woman in a very fancy print dress, exceptionally clear; the second of a woman and child, quite clear; and the third a very sharp image by Thompson of 18 Broadway, New York of a small boy in trousers and shirt. Sizes are 2 ½ by 3, 2 ½ by 3, and1 ¾ by 2 ¼ inches respectively. The two ladies are in mattes, the little boy is in a very nice matte and half leatherette case. Processing and shipping within the continental U.S. $30.00 plus 1.5% replacement cost insurance.