The Estate of Clayton and Betty Bailey 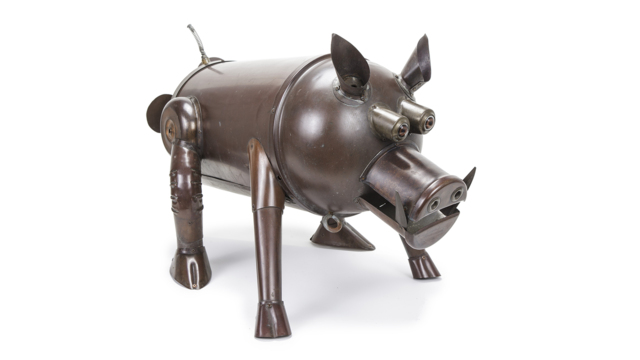 This auction has a buyer's premium of 21%.

Clayton Bailey (1939-2020) was known as an eccentric and good natured ceramicist and metal artist. He was a leader in the Bay Area “Nut Art Movement” as well as the “Funk Art Movement”. Born in Wisconsin, he married his high school sweetheart, Betty Graveen, and moved his family out to California. He initially joined the art department at UC Davis (home to Robert Arneson, Wayne Thiebaud, William T. Wiley and Roy DeForest) and later joined the art department of Cal State East Bay where he later became Chair of the Art Department. He and his wife lived next door to Roy and Gloria DeForest. “We were like a one-acre art island,” said Gloria De Forest, “Roy was on one side and Clayton was on the other.” They met in the middle to form the “Nut Art Manifesto,” a written statement that accompanied a group exhibition at Cal State Hayward in 1972.Collaborating with these artists, he honed his art to be humorous, irreverent and quirky. “Clayton was such an unusual and lovely human being,” said Benicia sculptor Sandra Shannonhouse, Arneson’s widow. “His art was so quirky and out there that a lot of people didn’t take it seriously. But it was serious.”

He developed his alter ego, “Dr. George Gladstone (a parody of a “mad scientist”) who wore a white lab coat and pith helmet while performing excavations and pranks. His art expanded to robots, ceramic heads and other sci-fi inspired oddities. Mad Magazine and EC horror comics were his inspirations. The most visible and celebrated ongoing project Bailey shared was the mustache that he started growing when he moved to Port Costa, an 1880s railroad town on the Carquinez Strait, in 1970. It grew at the rate of an inch a year for more than 25 years until he finally cut it off and put it in a carved wooden box with a handwritten label on top.

The Estate of Clayton and Betty Bailey showcases his expansive oeuvre as well as his personal collections of his colleague’s works. Many of these works were exhibited in the Crocker Art Museum’s 2011 exhibition, “Clayton Bailey’s World of Wonders”. We hope you will be smiling as you view their collection.