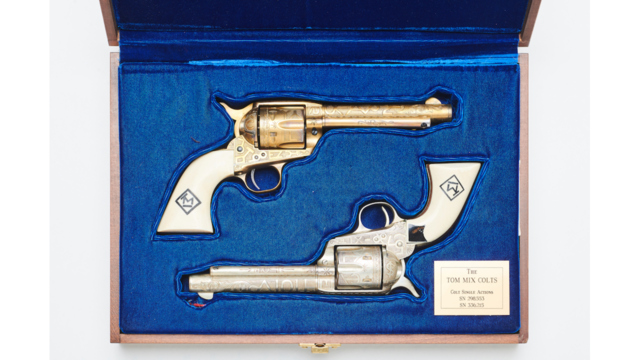 Our Fall 2021 Luxury Asset Auctions  Features property from the James H Earle Family Trust, College Station, TX and property from various owners. These collections include jewelry, fine art, antique Dolls and firearms. They are all, comprehensive and include some rare and important examples.

Part II represents the items under $1,000 and is limited to online bidding though Witherells.com.

My friend and fellow Western history aficionado Jim Earle rode over the Great Divide February 5, 2019.  Our friendship began in the 1970's, both of us members of the Texas Gun Collectors Association, of which he served as President during the years 1984-85, later Editor, and his wonderful wife Theresa supported him by serving as Secretary for many years.  At the time, Dr. Jim Earle was Professor of Engineering at Texas A & M University at College Station, Texas where he lived with Theresa and two daughters.  A keen student of western history, his main hobby was collecting arms of famous characters of the Old West, specializing in the guns of outlaws and lawmen, but a little known fact is that he also enthusiastically collected boxing memorabilia and other items revealing his wide areas of interest.

Many of his friends made periodic visits to the nice home of the Earles where we were always received warmly by Theresa and Jim who shared our discussions of western history.  During one visit with the late Bob McCubbin, John Boessenecker and I were sitting in his "collection room" which had an open closet area full of uniformly filed white notebooks.  As we oohed and aaahed over the hardware, the guns, etc., Jim suddenly turned aside and pointed out the notebooks.  "See this," he said emphatically, "...this is the most important part of my collection, because without all this documentation and provenance my guns mean nothing...".  Indeed Jim was well known for being a stickler for documentation; his standards were rigorous and he only bought historical weapons that could be "proven".  It is a fact that Jim Earle was a leader in establishing standards of proof of a gun's history, and he taught many of us to demand the same high standards.  Consequently, he amassed one of the best collections, if not THE best collection of historically-documented guns of the Old West period.  Like George Look, the turn-of-the century owner of El Paso's famous Coney Island Saloon, Jim and Theresa both had the foresight to obtain and preserve old guns from famous characters, accurately predicting that their value would increase as more western aficionados began to appreciate western history, and they have been proven right.

Jim and Theresa enjoyed western history so much that they also preserved it in their publishing companies, The Early West Publishing Co., Creative Publishing Co. etc. which was based in their home town of College Station, Texas.  Bibliophiles and collectors have since benefitted greatly from their foresight on publishing rare and obscure information that might otherwise have been lost. Few collectors leave a permanent mark on the hobby, but Jim and Theresa Earle managed to do it in such a positive way that influenced so many collectors who are carrying on their legacy today, and anyone would be proud to leave such a mark on the world where they "truly made a difference."  Owning a piece of the Earle collection is an honor of which one can be proud.