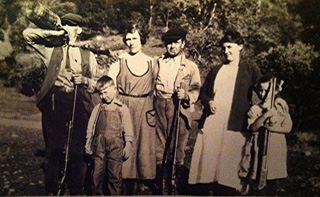 On Saturday March 14th, Witherell’s will be offering nearly 100 antique firearms collected over 100 years ago. According to family tradition Uncle Paulson began collecting in the 19th century and his nephew Sam Kerbey (photographed in the center of the below image) continued the tradition.

Sam was trained as a sail maker but as the industry faded he became a shoe maker. Custom shoes and repair was a growing profession and he was able to prosper during the great depression. In 1952 he passed the gun collection on to his son Russell Kerbey seen as a young boy in the below photo bottom left. Russell place the collection in storage the same year where it remained undisturbed until recently.

Discovering extensive fresh to market collections like this is what makes this business fun. We were recently featured on a Fox Business Chanel episode of “Strange Inheritance” with a similar discovery of the Carmel gun collection of Lt. Col. Arthus V. Crego. While not as valuable it is as extensive and we are looking forward to offering a large portion of the collection at a live warehouse auction on Saturday, March 14. Preview will be held Friday March 13 from 5 – 7 p.m. and prior to the auction on saturday from 8 – 10 a.m.