Tobacco Carves Out a Place in History 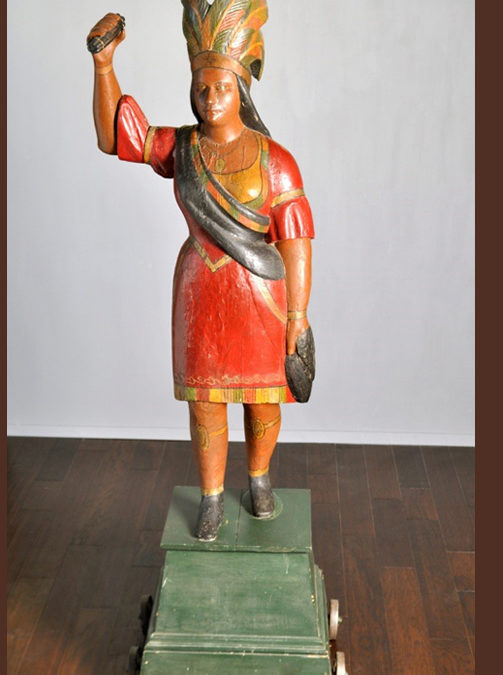 One of many interesting artifacts of the Old West in our Old West Auction is a beautiful example of the Cigar Store Indian (or Tobacco Indian). This particular carving dates to the late 1800s, likely from the Wyoming-Montana region. It came into our hands after being sold to Sotheby’s, then to a Northern California dealer and finally to a collector in the Central Valley.

The Power of Advertising

Clearly, we all recognize the images were intended to sell tobacco to the early settlers of this country. But, there is a deeper history to this icon that is both revered as part of Old West romanticism as well as an affront to Native Americans. At the very beginning of its history, the use of a Native American image was a sign of “credit” given to tribes for introducing tobacco to Europeans. The first tobacco plantations started in Virginia in 1710 and within a few years small carvings of dark-skinned men wearing tobacco leaves advertised the products on merchants’ countertops. Next, the icon took to the sea as skilled wood carvers hued figures that were attached to the bows of sailing ships heading from the New World to Europe, laden with tobacco to sell to a distant and vast market.

In the early 1800s the tall ships were dry-docked by the innovation of steam engines that crossed the oceans much faster and more reliably than wind-driven sails, and the Tobacco Indian returned to land. Carvings then underwent another evolution as craftsmen fashioned them for merchants who used them to advertise the sale of tobacco in front of their shops. Many of the early images were fanciful, reflecting the fact that the wood carvers in the cities had never actually seen a Native American. But, their skill was a recognized niche and the artisans competed to carve the best and most unique examples of their craft. The image became synonymous with tobacco sales, particularly for a population that included non-English speaking immigrants and settlers who had never learned to read. This approach was not unusual – think about the red and white striped pole for the local barber and the ‘show globes’ in windows of pharmacies. It was all about communication and advertising!

Cigar Store Indians finally went up in smoke after 1910 when cities passed “sidewalk obstruction laws.” The life sized statues never made the transition to indoor advertising and, with the advent of the Great Depression, many were chopped up for use as firewood.

Like so many artifacts of a country’s past the Cigar Store Indian comes with a colorful history of both pride (as progenitors of tobacco) and prejudice. I trust ours will find a good home that appreciates and values its place in America’s heritage.

We have lots more in our May online Auction and the Old West Show in Grass Valley. Join us for all the excitement!