The Lion of Judah 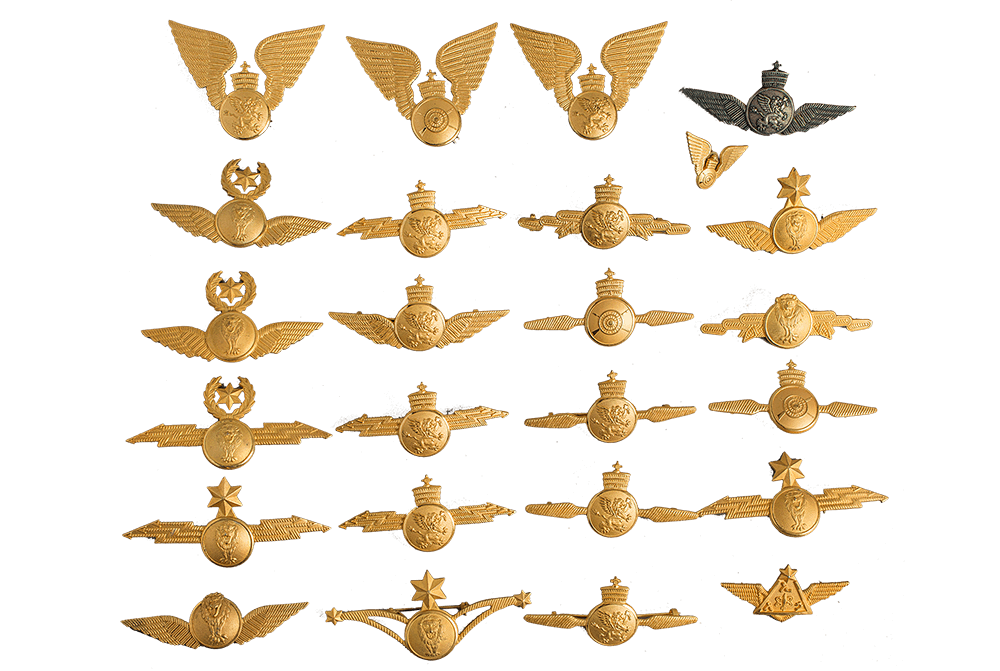 Many military items have symbols on them: swords, medals, badges, uniforms—pretty much you name it, other than the most basic field equipment, and there will be one or more symbols on it. Studying the symbols on the items that you collect can help you to understand an important aspect of those items: how they relate to tradition, history, or even intention.

If you have read any of Dan Brown’s novels or seen the movies made from them, then you already know that symbols can be an entire language to themselves, and an interesting one, too. It is very helpful to learn the symbols of the country or culture your collectibles come from, because three ostrich plumes mean one thing on a British badge or medal, and something entirely different on an Italian medal, and one country’s lion can look a lot like another country’s leopard! 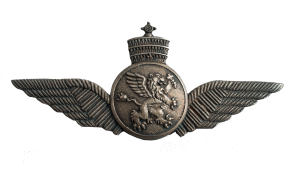 The incredible wing collection that I have been working on has literally hundreds of examples: the term wings itself is a fairly obvious example, but there are others, some pretty surprising. Polish aviators’ badges are a great example: most flight crew badges are based on an eagle, and those eagles are doing slightly different things. Some are flying to the right; some are flying to the left. Some hold wreaths, some hold lightning bolts. One of my favorite Polish badges isn’t an eagle at all, but an angel, shooting a bow and arrow, and he is not Cupid! It is actually one of the earliest Polish air gunner’s badges.

One of my favorites in this amazing collection is the grouping of wings and badges from Ethiopia. Now, I have to admit, I had not given any thought to what the Ethiopian Air Force wears. This is despite the fact that I spent two years in graduate school studying African history, and Ethiopia was a large part of that. So, when I encountered the beautiful group of Ethiopian Air Force wings in the collection, I was really fascinated and excited. Not only were they beautiful objects, but they illustrated an important part of Ethiopia’s proud history. Each of the Ethiopian wings depicts the winged and crowned Lion of Judah. 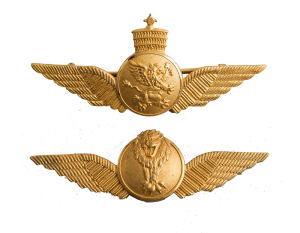 The Lion of Judah is a symbol that dates back 2,500 years, and touches on familiar Bible stories. It is a symbol given to the Royal line of Ethiopian Kings by no less a person than King Solomon.

According to the legend, one of Solomon’s wives (of which he had 700!) was the Queen of Sheba. After spending several years at the royal court of Solomon, Sheba returned home to Ethiopia, where she bore a child. That child grew up to become Menelik I, the founding Emperor of Ethiopia, and the title under which he reigned was “the Young Lion of Judah,” since his father, Solomon, was the Lion of Judah.

We know that the Ethiopians took this tradition seriously. Amharic, the main language, is a branch of Aramaic, the language spoken by Jesus, and there have been and are many Jewish Ethiopians. Likewise, when the apostles began their mission of spreading Christianity, one of the first places they visited was Ethiopia, and Ethiopia became the first Christian country in the world—about 50 years before Rome.

Even the crown on the Lion of Ethiopian wings is symbolic—it is a beehive shaped crown that probably shares its origins with the tall miters that Catholic cardinals and Popes wear. Most depictions of the Ethiopian crown also have a cross atop the crown.

The first thing that struck me about the Ethiopian wings is just that they are beautiful. Their basic design is very handsome, and they all have a very heavy and rich gold finish. Then I turned them over, and got another surprise—the majority of the wings were manufactured in two places: South Korea, or Sweden! The quality on all the badges is outstanding. They are genuinely handsome reminders of Ethiopia’s long history.

The Ethiopian Air Force was quite literally founded by the last Emperor of Ethiopia, Hailie Selassie. He bought a number of aircraft types, which fought a gallant but unsuccessful campaign against the Italians when they invaded in 1935. Following World War II, the new Ethiopian Air Force was given its start by John Charles Robinson, who many credit with the creation of the US Tuskegee Airmen as well. Since then, the Air Force has served in a number of regional conflicts, particularly against Somalia and Eritrea.