The Kentucky Rifle- the “Build-a-Bear” of Historic Firearms 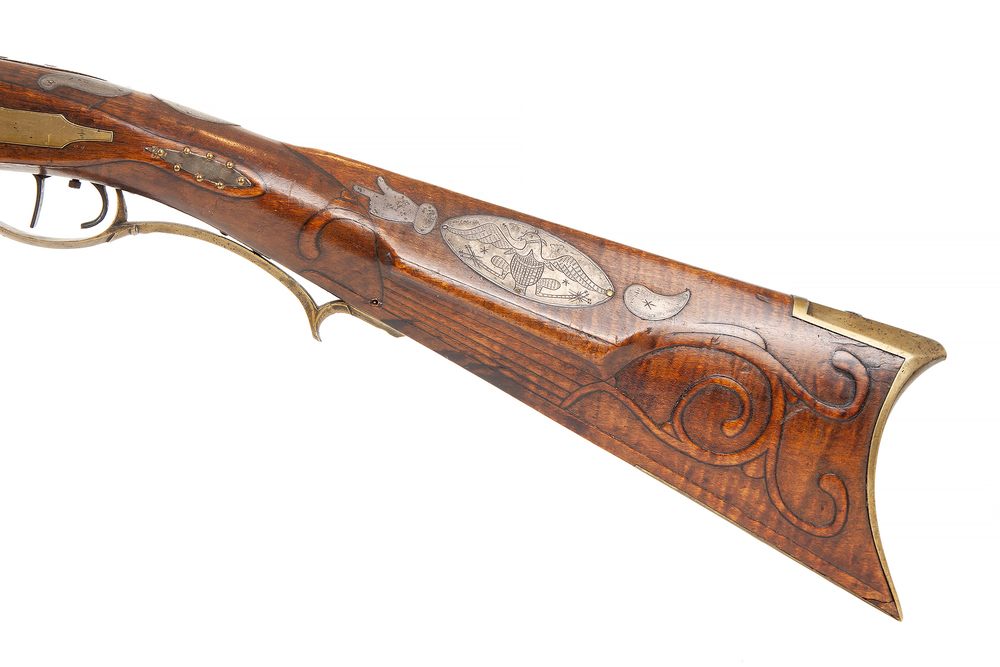 People today seem to love to throw around the term “iconic,” applying it to many things that are hardly iconic. Some things truly are iconic, though, and that includes the Kentucky or Pennsylvania long rifle. If you are old enough to have watched the “Davey Crockett” or “Daniel Boone” television series with Fess Parker, you certainly have a strong image in mind, and the beautifully filmed “Last of the Mohicans” certainly prominently features them, as do all of the various versions of “The Alamo.” Few of these go into any depth about the guns themselves. They merely show the frontiersmen’s handy use of the gun in potentially deadly situations, along with the uncanny accuracy expected from American frontiersmen with their trusty firearm.

Our September and January sales feature several outstanding examples of the type, displaying the common features shared by most, if not all. These include rifled barrels of great length, tiger striped maple full stocks, ornate brass patchboxes, frequently fancy brass trigger guards and other mounts, occasionally double-set triggers, and, needless to say, unerring accuracy.

The reality of these rifles is largely as they are imagined, although their origins are somewhat at odds from the details (if any) of the popular imagination: Properly, they are not Kentucky rifles, but Pennsylvania Long Rifles. The overwhelming majority of the known examples originated in one of several Pennsylvania counties. They were built and crafted individually by a number of skilled craftsmen, some of whom were parts of small dynasties of craftsmen of the same families. Some were made in Philadelphia. Most of them were assembled, as much as they were “made.” 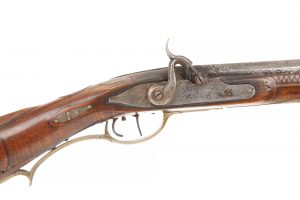 Few of the gunsmiths actually built the locks of the rifles. Most were factory made, some in the United States, but as many, if not more, in Britain, and bear names like Ketland, or London Warranted, as does the flintlock long rifle in our September sale. The barrels were also largely not made by the men who assembled the guns. Many of them were, in fact, American made, by craftsmen who labored in more rural counties of Pennsylvania. The rifling in particular was a hand labor, and of any of the elements of the rifles, bore the most skillful and dedicated craftsmanship. Great debate was invested in the number and depths of the grooves and the lands, as well as to the caliber of the bore, all dedicated to the legendary accuracy, as well as the range of the shot.

The mounts of the rifles were of many origins. Some were indeed made by the assemblers of the rifles. Most, however, were the work of brass foundries far and wide- some even beginning their existences in England, but most being made in Philadelphia, or in smaller, more local foundries. It is quite common to find rifles with mounts of differing origins, not to mention quality, as well as, occasionally, materials. One of the rifles we are offering in September has superb brass mounts and inlays, but the trigger guard was clearly made by a different craftsman. It also has a large number of parts crafted of un-hallmarked silver. 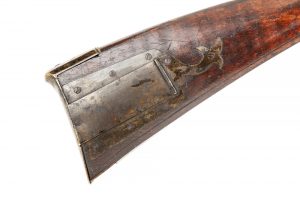 The one part that was usually made by the assembler was the stock- although many of them purchased stock blanks from carpenters and cabinet makers. The assemblers than had the task of assembling and finishing the rifles, usually to the needs and desires of the customers, although some were undoubtedly “off the rack,” that is, made up beforehand and sold as completed guns. Some were clearly created in bunches, and sold on to other retailers located on one of the paths and routes to the frontier, so that a man could walk into an outfitter, and walk out well-armed that very day. Nonetheless, few if any, are identical.

Many were genuinely bespoke: made to the orders and specifications of one man, and the percussion long rifle we are offering in September from the Shelton collection is a superb example. The assembler’s name, D.B. Border, actually appears on the lock, although that is not a guarantee that he made the lock. A set of initials is on the barrel, clearly not those of Mr. Border. The mounts are a mixture of brass and silver, including a spectacular American eagle on the cheekrest of the butt- D.B. Border was known as a silver smith, as well as a gunsmith, and there are a number of handsomely made silver inlays on the rifle.

The patchbox, on the other hand, is brass. It is flamboyant in design, and was probably also made by Border, although it, too, could have been purchased from a brass foundry, along with the trigger guard, the forend cap, and the ramrod thimbles.

The overall result is a superb and very handsome rifle- one that Davy Crockett of Daniel Boone would have been proud to own. True, it was assembled much like a “Build-a-Bear,” to the desires and needs of the ultimate owner, but as such, it displays true American craftsmanship and excellence, as well as being a piece of American history