Old West Show Gets the Gold and Great Results 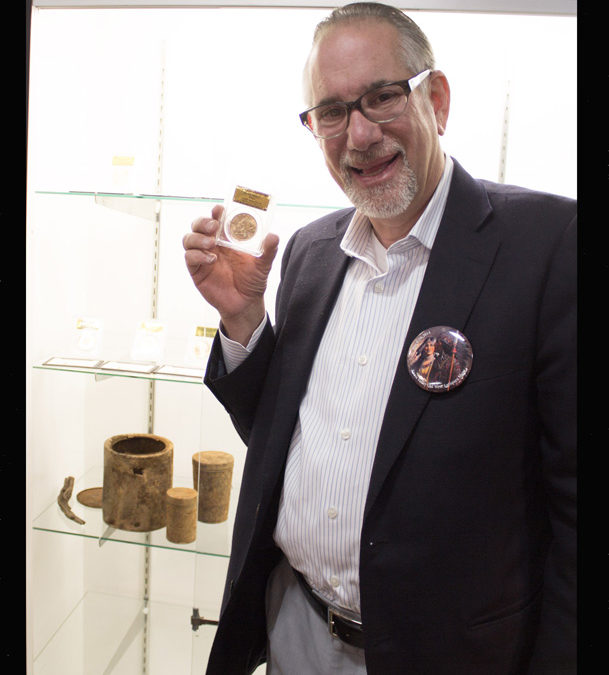 Witherell’s 2014 Old West Show in Grass Valley was a resounding success. From the sellers to attendees to the weather everything lined up to create a remarkable event.

Particularly exciting was the appearance of noted coin expert Donald Kagin, PhD, (see photo on the left) who has the privilege of handing the Saddle Ridge Treasure – a $10 million cache of gold discovered under a tree in the Sierra foothills. Throngs of people lined up at his booth to check out the pristine gold pieces and the rusted, Gold-Rush era tin cans that held them safe for more than a century. The coins will be sold on Amazon, singly rather than as a collection, according to Dr. Kagin. “The couple who found the gold on their property wanted to share ownership of it with as many people as possible,” he said. The identity of the fortunate couple is a closely held secret.

The least expensive of the coins will be listed at $2,500. Due to the abundant publicity the Treasure attracted (traveling as far as Thailand and Western Europe) Kagan says that selling prices could have justifiably been raised but were not. “We know that they will be worth more than a buyer paid for them the minute they are sold,” he added.

Some other highlight of the show included a stunning silver Bohlin saddle from the 1930’s that sold the first day of our show, priced at $125,000 – with a couple of custom tailored cowboy shirts thrown in to fancy-up the sale. A Henry Rifle (1860s – 1866) ) reportedly sold for six figures, and sales throughout the event were brisk – a great sign our economy is on an upswing!

We feel comfortable estimating our venders sold more than $1 million dollars over the two day show, exceeding the earnings of the previous two years. We’ll be writing lots more about the collectors and their treasures in our Blog, so stayed tuned – and subscribe to our Fab Finds Blog.

Next year’s show will once again be on Mother’s Day weekend – Friday May 8 and Saturday May 9. The work starts now!