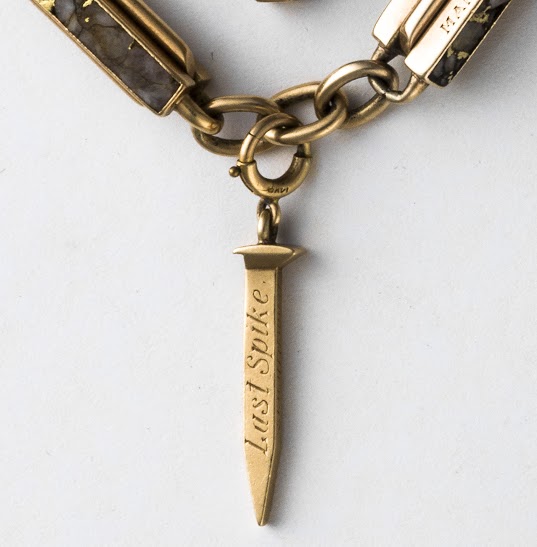 A newly discovered “Last Spike” watch fob of pure “Mother Lode gold” is being auctioned by Sacramento, Calif.-based Witherell’s May 1 to 15, 2015 and displayed at Witherell’s Old West Show in Grass Valley May 8 and 9, 2015. The excess gold for the watch fob was broken off the actual spike by legendary railroad magnate Leland Stanford before he used the gold spike to join the Union and Central Pacific Railroads in 1869.

David Hewes, an early champion of the railroads that made transportation across the nation easy for the first time, gave Stanford the gold for the spike and the California laurel for the last tie used in the May 10th ceremony.Nine miniature spikes and four rings from the “last spike” were commissioned by Hewes.Since they were cast nearly 150 years ago and given to Hewes’ friends, five have come on the market and been sold to museums and private collectors. No one knew if others existed until a descendant called “Antiques Roadshow” appraiser, Brian Witherell, about hers—after taking it to a jeweler who offered her the melt-down price.“No one knew this spike was even in existence,” said Brian Witherell, Witherell’s chief operating officer. “It could so easily have been lost in the 146 years since it was commissioned.“This is an enormously valuable piece of history that no one would have known about had it not been brought to a knowledgeable appraiser.”

The last known spike sold privately for $30,000. The gold and gold-quartz chain it is attached to is valued at $10,000 to $15,000. Other auction items on display will be two slot machines from the Pope Valley stage coach stop, a Frederick Remington bronze estimated at $30,000 to $50,000 and brewery advertising calendars circa 1909 valued at $10,000 to $15,000 each.The auction has more than 300 lots. Founded in 1969, Witherell’s does appraisals and auctions of objects of value—from decorative arts and design to antiques and fine art.Witherell’s places items globally through private sales to museums and individuals, online auctions and the annual Witherell’s Old West Show in May.