A Model 1860 Henry Repeating Rifle that was manufactured in 1863 and sold to the federal government for use in the Civil War is one of the highlights of the catalogue auction. The rifle was captured in October 1864 by Private James G. Sandidge of the 6th Louisiana Cavalry, who sent it home. It was later presented to Sandidge’s brother, George M. Sandidge who was also of the 6th Louisiana Cavalry, at the latter’s wedding in 1868. The item came from the Arthur V. Crego collection, most of which was auctioned by Witherell’s in 2010. 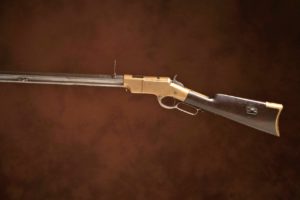 This firearm came to Witherell’s for the catalogue auction when the son who had inherited it from the estate, decided to sell it. Being the first repeating rifles, Henry rifles were one of the mechanical wonders of the 19th century. Because of its historic significance in changing battles forever, it is a sought after weapon today in any condition. For a battle-carried rifle, this Henry is in remarkable condition. Its part in the Civil War also makes it valuable. It is estimated at $15,000 to $25,000.

A Frank Bramley, A.R.A., painting from the Newlyn School is another great find for the March auction that might end up being the most valuable lot in the sale. With its luminous sunset in the background and the bright color of the clouds being used again in the faces of the family in the foreground, “Daddy’s Welcome” is a prime example of the Newlyn School. Like the Barbizon school in France, Newlyn painters in England became known for genre scenes and plein air paintings that emphasized rural settings and natural light.

Bramley (1857-1915) studied in England, before travelling to Antwerp and Venice to study. He finally settled in Penzance, Cornwall to become a member of the artists’ colony. The painting came from a family in south Sacramento County who had inherited a collection from their father of elaborately framed artwork, so much so that even the prints had extremely elaborate frames. Because the Bramley is the only standout in the collection, it looks like the collector may not have known the significance of the piece. Certainly, the family didn’t. 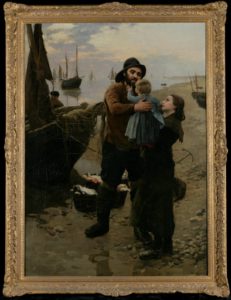 These discoveries are what makes our work so exciting and our knowledge as appraisers so useful to the families we work with. Had the family not contacted us, this fine work of art may have been lost forever. With the A.R.A. initials, we were able to date the painting between 1864—when Bramley was voted into the Royal Academy as an Associate—and 1911, when Bramley was admitted as a practicing artist to the elite group of 42 Royal Academicians. Because Bramley regularly exhibited at the royal Academy, the painting, which is 44-by-32 inches and appears to be in the original frame, could be worth much more than the estimated $8,000 to $12,000. Genre scenes on par with the artist’s finest works have sold for six figures.

Sportscars are exciting items and the red, 1961 Triumph TR3 Roadster is one of the hottest items in the catalogue auction. With brown leather and velour interior with wooden steering wheel, this convertible would be perfect for anyone wanting to add some extra get-up-and-go to their life with a luxury, mid-century modern look in their wheels. With a 4-cylinder engine, dual carburetor, 4-speed manual transmission and floor shift, this lovely ride is valued at a mere $8,000 to $12,000.