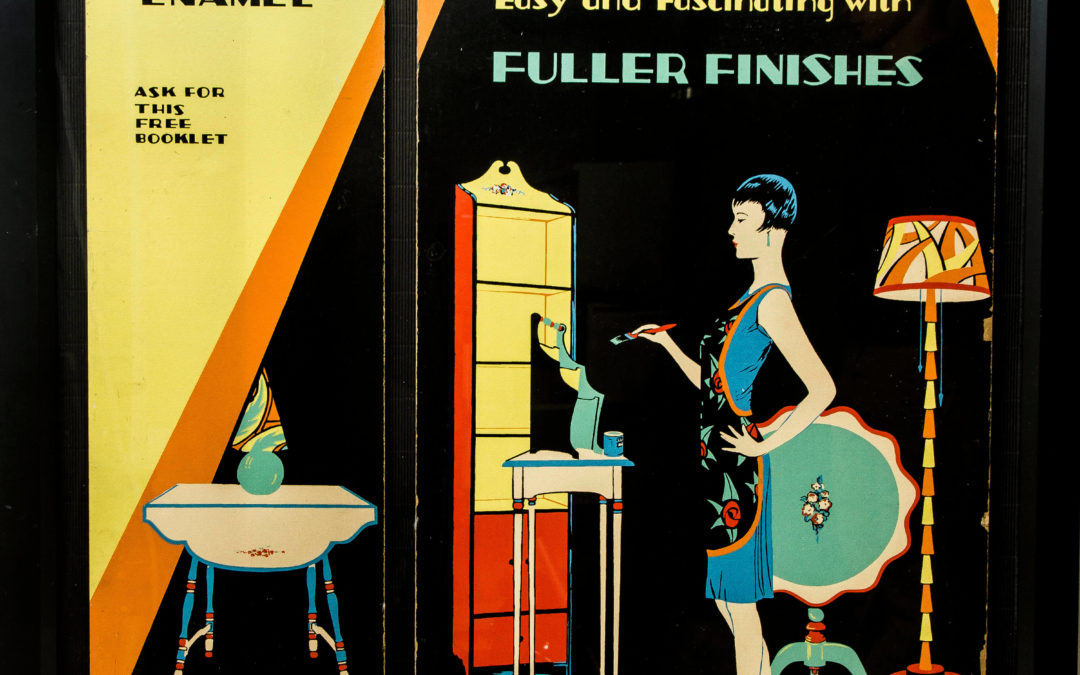 We are very excited to have a Fuller flapper ad from the 1920’s in our Summer auction. Not only is it a colorful example of 1920’s Art Deco design, but the company William Fuller founded was one of the great California businesses to emerge from the Gold Rush Era. Born and raised in Boston, Fuller arrived in San Francisco on September 15, 1849. Because of the lack of a railroad linking the two cities, Fuller spent one hundred and sixty-five days on a ship that went round Cape Horn, Chile, to get to California. Like the experiences of most pioneers, Fuller’s first few years were formidable—fraught with hardship, misfortune and no insurance. The money Mr. Fuller earned from gold mining in 1849 was invested in a Sacramento bathing house venture, which was destroyed by the flood of 1850.

During the rebuilding of Sacramento, Fuller returned to the paperhanging trade he learned in Boston. Unfortunately, the money he was able to save, working between bouts of small pox that killed off 15 percent of the local population, was lost in 1850 when the private banking firm of Barton, Lee & Co., where he had his money closed down.Bankrupt again, the ever-resourceful Fuller was able to recover and soon after, established a paper hanging firm called Fuller & Jones. By 1851, they were advertising in the first Sacramento business directory. During the next few years, Fuller had many business partners as people came—and went—after discovering the hardships of frontier life.

In 1868 Fuller formed a partnership with W. Frank Whittier, a native of Maine who arrived in California at the age of twenty-four and was described as a “shrewd, capable and active businessman.”A success by the time the two men met, Whittier had bought into and eventually operated Cameron, Whittier & Co. Whittier and Fuller began producing the mirrors that made them famous as part of their venture.In 1869, they were awarded a silver medal at the San Francisco Mechanics Fair for a mirror in a carved and fluted, black walnut frame that was described by a local reporter as a real “snorter”.In fact, the mirrors produced by Whittier, Fuller & Company are significant tools in the identification of 19th century California furniture. They are usually marked with the month, day, and year of manufacture, along with the company logo, “W. F. & Co. San Francisco.”Because they were said to be, “Impervious to moisture and the effects of climate change,” the composition-covered mirrors were a technological breakthrough at the time.

By 1878, the business was considered the largest in the trade with assets upwards of $1,000,000.By 1885 Whittier, Fuller & Co., had expanded its operation and had to branch offices in Oakland, Portland, and Los Angeles.In addition, they had begun the manufacture of glass and were the first company on the West Coast to do so.

By 1892, their mirrors were considered to be …“As good as any made in any other part of the world” and shipped across the Pacific Coast, the Atlantic States, Mexico, Central America, the Hawaiian Islands, Australia and New Zealand.After the Fuller family acquired the interest of the other partners in 1894, the firm of Whittier, Fuller & Co., was reorganized as W. P. Fuller & Co.By the 1920’s, when we see the flapper ad, they had added paints and finishes to their expanding business model.Through earthquake, the Great depression and World War I, the company continued to expand. By 1935, they had three factories and forty offices in seven states.The firm operated as Fuller O’Brien Paints until it was bought by ICI Paints in the 1990’s.