From President to Indian Chief, a Medallion’s Journey 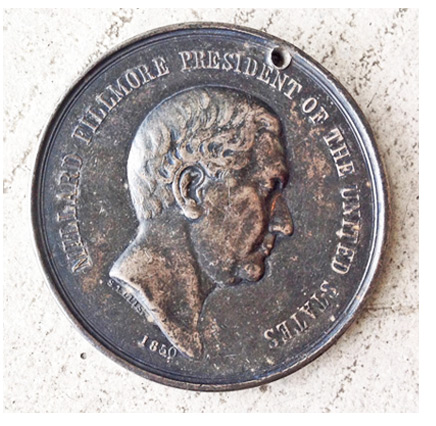 It was a call from Gold River that produced one our most exciting finds of the season. I set off on the short drive anticipating a nice collection of Civil War items, but perhaps nothing that send my pulse racing. As the consignor promised, I saw a number of artifacts that had been passed down through the family from an ancestor who had been an officer in the Civil War. We greatly value the history and cultural importance of such family treasures – some are, indeed, rare and valuable and many others are still relatively common in Americana collections. Much of the collection fell into the grouping of historically interesting but not unusual artifacts.

Small can be Beautiful or Fake

However, a small item in a packed display cabinet caught my eye. I reached in and retrieved a silver Peace Medal from the presidency of Millard Fillmore (1850 – 1853) and felt I was holding a diminuitive treasure in my hand. Of course, I had to pause and rein in my excitement – Peace Medallions are among the most copied and forged objects in the antiques trade! But this one had all the hallmarks of authenticity – a traceable history, appropriate wear and tarnish on the silver. Let me add that, in my experience, authenticity speaks for itself nine times out of ten. There is a certain provenance and character that is almost unmistakable as a valued item is handled and cared for over 165 years.

From President to Indian Chief

Medallions had been made since George Washington’s administration. Initially there were in a copper based metal and, after 1850 also created in silver. The silver pieces, such as the one we discovered, were sometimes called Chief’s Medallions – prized by the Chiefs and often handed down through generations. They were presented to Chiefs in exchange for allegiances or recognition. Indeed, they were also part of the betrayed trust many tribes placed in the words of government officials. Promises broken and territories lost. Certainly, the buyer of this fine medallion may research further the history of who may have given and received this Millard Fillmore silver piece, made in 1850 and released in 1851.

The family in Gold River had no idea the medallion would trump the other items in their collection. And they were pleased to get an auction value of $5,000 to $10,000 or more, in the right venue. It will be proudly included in our upcoming Grass Valley Old West Show, May 9th and 10th.