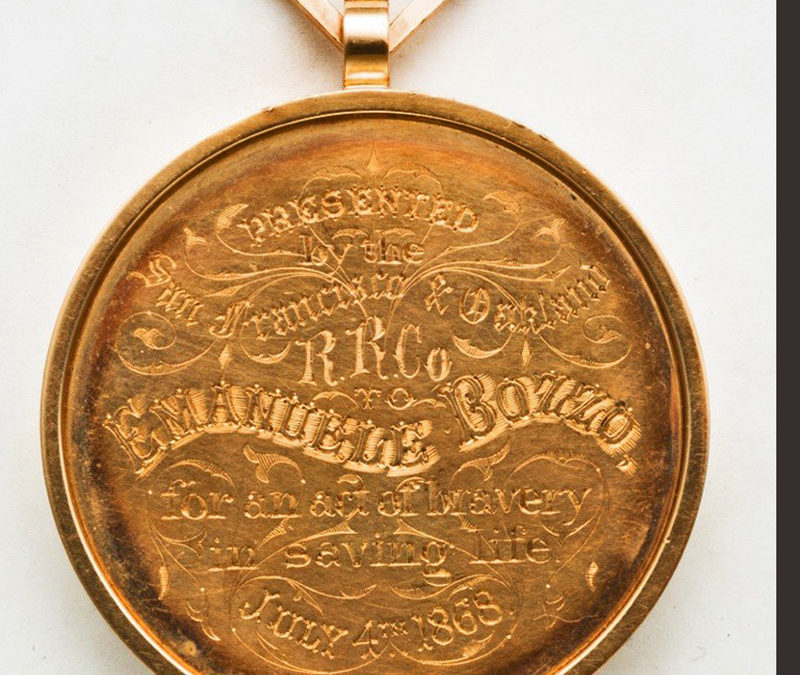 The early morning of Saturday, July 4th, 1868, brought a chilly mist to Oakland, one that promised to fulfill predictions of rain for the holiday. But by 9 A.M. the grey fog lifted and with it rose the spirits of revelers that came from throughout the Bay Area, some traveling by ferry boat and train from San Francisco. Throngs gathered on the streets to watch a grand parade led by a stalwart unit of mounted police followed by the 15-piece Oakland Brass Band. Contingents of Chinese shot off fireworks; there was cannon fire, music and unfettered joy, and particular appreciation for the Garabaldians, Italian immigrants who carried 60 muskets and boldly waved the Italian and American flags. It looked as if Oakland’s annual Fourth of July celebration would be remembered as a great success. Indeed, there was no hint of what would come to this same contingent later in the day.

The tragedy began about 4 P.M. when the Italians boarded the San Francisco-Oakland train that would take them to the far end of the Oakland Wharf where a ferry boat, The El Capitan – then the largest and newest ferry boat on the Bay – waited to take them home to San Francisco. The wharf had recently been extended to facilitate boarding the ferries, and train passengers flocked out onto the “apron” where the El Capitan bobbed on the waves as passengers eagerly flooded aboard. Just as the crowd was at its most dense, a sharp “crack” pierced the air followed by a thundering crash as the gang-way split from the pier and plummeted into the water.

Reports estimated at least 150 men, women and children plunged helplessly into the dark waters, screaming and struggling to survive. Newspapers reported that the crew of El Capitan was very slow to respond, even refusing to throw the boat’s ropes into the water to rescue the Garabaldians. There was public speculation that the lives of immigrants hadn’t been valued by some of the boat’s crew. At the same time there were accounts of many others who risked (and sometimes lost) their lives in an effort to rescue the terrified victims. Among those who leapt into the churning waters of the Bay was an Italian immigrant named Emmanuele Bozzo.

Born in about 1818 in Italy, he immigrated to the U.S. in 1854. Records indicate that he owned a wood and coal business in San Francisco by the name of E. Bozzo and Company. Reportedly, Mr. Bozzo showed no hesitation to do whatever it took to rescue as many people as possible. His efforts and heroic acts were noted by the San Francisco-Oakland Railroad when he was presented with a California Life-Saving gold medal that states “For an act of bravery in saving life, July 4th, 1868.” Mr. Bozzo was further rewarded with living until the age of 91 – remarkable longevity at that time in history.

Witherell’s is very pleased this beautiful medal, so rich in California historical significance, will be offered for sale by a prominent collector at our May 8 and 9 Grass Valley Old West Show. This one-of-a-kind piece comes with a unique story of the contributions of Italian immigrants to the rich fabric of our state.
Learn more about the Grass Valley Old West Show HERE.