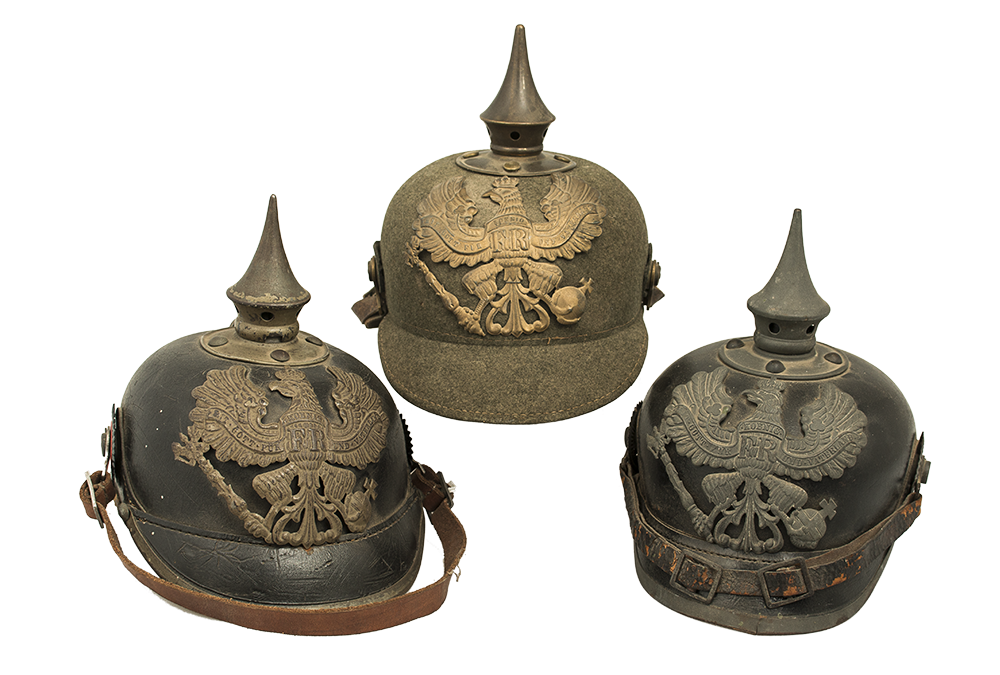 War is always a time of waste and want. Young lives are wasted. Goods and property are wasted, too. In most, if not all modern wars, there have been shortages: of food, of certain materials, of medicines. If you can name it as something that is needed both on the war front, and the home front, then you can assume that there will also be a shortage of it, possibly only briefly, or possibly until the war ends. It can also become a weapon, when one side intentionally causes shortages for the other side. Our famous bombing of the Ploesti Oil Fields created shortages for the Germans that factored into our defeat of the Germans in the Battle of the Bulge. The battle of Gettysburg was fought where it was in part because Gettysburg was home to a shoe factory, and the Confederate Infantry was largely barefoot in the summer of 1863. 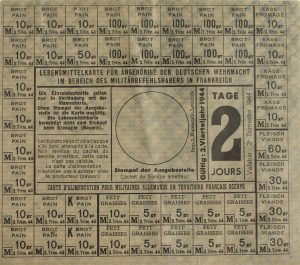 The collections that we will be selling in January hold a number of artifacts that remind us of those shortages. One lot has coupons for bread, issued to German soldiers in France—each coupon entitling a German soldier to claim a loaf of bread in a French bakery. It is easy to imagine the anger in the Frenchmen who had to stand aside while the German soldiers took their bread. US and British ration coupons tell a similar story on friendlier fronts, where everyone had to share in the shortages, or sometimes substitutions, in order to help win the war. A classic example that survives to this day is the blending of chicory with coffee. During our Civil War chicory was roasted and used as a straight replacement for coffee, or as an additive. Some people came to enjoy the taste, so it continues today, most notably in Louisiana, where the practice originated. The same is true for “oleo,” or what we today call simply margarine. It was created as a substitute for butter, as real butter had a number of strategic uses—such as in glue.

The word “ersatz” apparently entered the German dictionary in the 1860s and 1870s. It actually means “replacement,” or “substitute.” However, by World War I when it also entered the English dictionary, it had taken on the additional meaning of something that was a poor replacement, even a phony replacement. Shortages in the trenches were to be avoided at all costs, so on the Home Front, the German people were forced to accept substitutes. “War Bread” had the wheat replaced with rye, oats, and even, at the end of the war, a bit of sawdust. So, “ersatz bread” became commonplace in Germany as the Allied blockade took effect. It is ironic to realize that if you eat piece of multi-grained bread with margarine, you are eating what would have been considered an entirely “ersatz” treat!

The Germans in particular had to turn to substitutions to continue their war effort. Even early in the War, leather became in short supply. Every soldier needed considerable amounts of it for belts, straps, boots, and of course in Germany, for their “picklehaube,” or spiked helmets. Those picklehaube became the first things to change, as, in the trenches, they were the least vital to a soldier’s welfare. However, instead of simply replacing them with a more practical headgear, the Germans created an “ersatz picklehaube.” This generally had the same mounts as a pre-War picklehaube, but the leather was replaced, sometimes with steel, but more frequently with pressed felt. We have a beautiful example of such a helmet in the January sale: it has beautiful “tombac” (brass with a higher copper content, and zinc, with no tin whatsoever) mounts, but the leather has been replaced with a thick grey-green felt. The one in the sale has a Prussian helmet plate, but they can be found with plates from most of the various German states. There are also a number of conventional picklehaube in the sale, some with the regulation tombac or brass mounts, but some with grey metal mounts, another form of ersatz that was actually in use before the War.

Belts, straps, and packs made of cotton canvas webbing are now virtually universal. Originally they, too, were substitutes. At the Beginning of World War I most of the world’s armies went into battle wearing leather. Soon, especially in Britain, it became clear that leather for belts and straps was simply not sustainable. So, they turned to the great textile mills of Britain, and soon soldiers were wearing web gear, even carrying their pistols in web holsters and their rifles by web slings. This was discovered not only to be economical, but actually more comfortable. Leather survived for ceremonial gear, and more commonly for officers, but even the Guards found themselves applying white pipe clay to web gear after the War.

Another reason for ersatz was simplicity. Cutting out one or more steps in manufacture saved time, money, and labor, as well as strategic materials. Towards the end of the War German bayonets were commonly made with all-metal grips, rather than wooden grips on a metal base. This spared the wood for other uses, as well as a lot of time. We have an ersatz bayonet in the sale in January as well. Comparing it to the usually excellent German workmanship of earlier and later times, it is clear that shortcuts were being taken. These steps did not make the bayonets less dangerous to the enemy, but they did create a savings in time, material, and effort. The same can be said for ersatz food. It was not the government’s intention to harm anyone—although many civilians did suffer malnutrition that contributed to the influenza pandemic. The goal was to save time, effort, and even lives by stretching what they had as far as it could be stretched, and by doing so, to win the War.