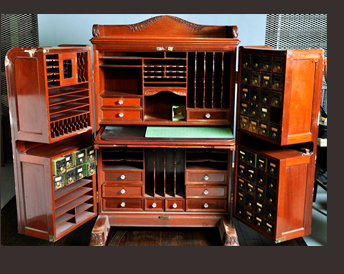 Our idea of the romantic and heroic Argonauts has its genesis in an ancient Greek myth in which daring sailors set out to find the Golden Fleece. But, Californians have a far more recent reference. The Gold Rush brought countless adventurers and seekers of gold to the Sierra and among them was Darius Ogden Mills. Born in 1825, he joined the rush to riches in the West in 1848. Rather than stake his fortune on mining for gold, the later-day Argonaut founded a bank in Sacramento where he protected the fortunes of gold and silver mining companies as well as investing in the railroads that supported the booming Gold Rush years. In 1864 he cemented his place in California history by joining a consortium of investors to launch The Bank of California –now the Union Bank of California. And, that’s where Witherell’s comes in!

In the 1860s Mills built a magnificent mansion in Millbrae, California, later to be known as Happy House. The 1500 acre estate became the hub of the Mills family for three more generations before it was sold in the 1950s. Among the items purchased at that auction was a striking and unusual “Wooten type” desk that we are proud to offer for sale at the upcoming Grass Valley Old West Show in May. Wooten desks are recognized for their complicated and intricate design of multiple drawers and hidden compartments.

The desk from the Mill’s auction came from Herter brothers in New York – a prominent cabinet maker and decorator that contributed work to the renovation of the White House dining room and the East Room during the administration of Pres. Teddy Roosevelt.

As you can see in the photo, the desk is dazzling in its quality and complexity! It is the product of genuine “cabinetry” – hewn and built by guild-trained craftsmen, likely immigrants from a tumultuous later 19th century Europe. In America they were able to practice their craft in an unfettered New World full of freshly minted millionaires looking for the best that money could buy. Mr. Mills, a respected businessman and philanthropist, was a titan of the times with the money and good taste to acquire such a fine piece.

Despite the obvious quality of the Mills desk, mystery surrounds it because we cannot be certain of the maker. There is label affixed to one of the drawers that identifies the makers but that label was covered over with another label from the Washington D.C. retailer who sold it. Thus we may, or may not, have a Herter or a Wooten desk but, no matter the cabinetmaker, this is a very fine piece of California history.

I find it interesting that for more than a century no one has chosen to peel away at that label in the hope of discovering the maker’s name. Of course, an unsuccessful attempt could negatively impact the value and integrity of the piece. And, actually, the mystery somehow adds to the value of this beautiful example of authentic craftsmanship. We conservatively estimate it will sell for between $3000 to $5000, but could easily go significantly higher.

Make sure to see the Ogden Mills desk and so many other artifacts of the Old West at our Grass Valley Show May 9 and 10th.

Also, add your thoughts and questions to this blog or send us an email!