Considering the Collection I: The Philatelist 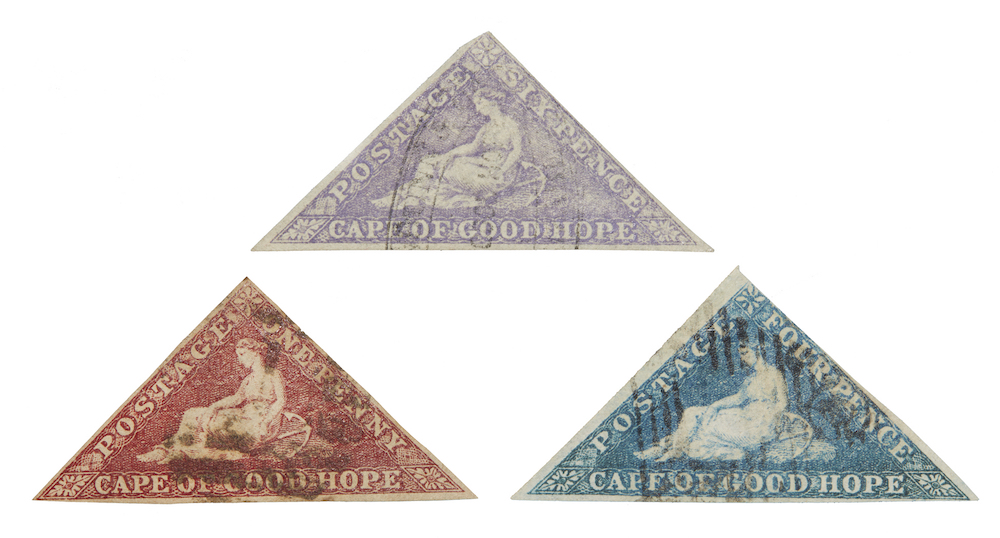 The philatelist is in many ways the quintessential collector. My mind paints a clear picture of him – a unique individual who shrewdly acquires, carefully catalogs, and meticulously arranges his stamps; who vies with colleagues for the greatest and most comprehensive postage collection; and who proudly displays his assemblage of treasures for family, friends, and other privileged guests. As our Cape of Good Hope Stamp Auction approaches, it occurred to us at Witherell’s that this may be a good time to explore what it means to be a collector. Philately is inextricably bound to the practice of collecting – a philatelist is by simple definition a stamp collector and a collector is by simple definition an individual who gathers together specific objects of interest as a pursuit and/or for amusement. Understanding the technical and historical background of philately, collecting and some related key terms will reveal surprising links, prompt compelling questions, and allow us to appreciate more fully the intensely complex concept of collecting.

Philately, noun.
I. The collecting and study of postage stamps or other devices used for or relating to the prepayment of postal charges; stamp collecting. (c. 1865)
II. Stamps collectively. (rare, c. 1930)

In 1864, Georges Herpin, a French stamp collector, coined the term philatélie. The English adaptation of the new French word followed shortly, first appearing in print in a 1865 issue of The Stamp-Collector’s Magazine: “[M. Herpin] proposes the word philatélie, which we anglicise into ‘philately’.” The first part of the word, “phil,” comes from the Greek philo meaning love of or attraction to. The second, “atélie” or “ately,” is taken from the Greek word ateleia meaning exempt from tax. This may seem a bit odd – philately, the love of what is tax-free. What do stamps have to do with taxes (and who doesn’t love to avoid extra fees)? There is a perfectly reasonable explanation for this bizarre term, but we must look into the origins of postage to uncover it.

The British government issued the first official stamp in 1840 in a move that, in effect, created the modern postal industry. Before the mid-19th century, letter and parcel delivery was always paid for by the receiver, who was responsible for compensating the courier upon collection of their mail. As the system began to change and the sender began to pay for the service of delivery, stamps were invented to function as a marker to indicate prepayment of delivery. In this way, stamps were essentially proof of payment and, therefore, notified the receiver that their mail delivery was free of charge or “tax-free.” The British government then took on the task of officialization and standardization and the rest of the world followed suit. Not surprisingly, collecting these new postage markers became a popular pastime since stamps were relatively cheap, perfectly sized for laying out and sorting, as well as interesting and fun to look at!

Although dismissed by some as a childish avocation, as the geographic, economic, historical, social, and even artistic significance of stamps came to be studied and appreciated, stamp collecting become quite serious business. By the early 20th century, a few of the most well-known philatelists, like George V and Franklin Roosevelt, could also count themselves among the most powerful men in the world. Often philately entailed the collection as well as the study of stamps and involved the careful selection, informed arrangement, and strategic presentation of postage – informed by a community of stamp collectors and motivated by a sense of personal achievement. Although technically a philatelist is not required to own stamps in order to study and appreciate them, for our purposes we will focus exclusively on the philatelist as a collector.

Born in 1909, Alton Holje Barnes began amassing his stamp collection at an early age and at a time when philately was becoming an increasingly refined leisure occupation, primarily among middle and upper class members of society. Born into an affluent family, Barnes was fortunate enough to have the means to support his interest in philately, which was a potentially expensive hobby. The original extent and composition of Barnes’ collection, particularly the group of Cape of Good Hope postage stamps, reveal the depth of his commitment (financial and otherwise) to collecting and suggests his dedication to philately exceeded the level of a mere pastime. Like any collector, the philatelist certainly takes pleasure in his collection. For many, especially in the late 19th and early 20th century, the geographic and visual nature of stamps was a way to explore the world, but on a private, intimate level (a concept that is often referred to as “armchair travel”). However, the devoted philatelist, like Barnes, acquires with a purpose greater than entertainment – deliberately choosing and purposefully selecting stamps, he is motivated by the desire to expand and improve his collection. Early philately was a significant pursuit of passion and it was through the specific title of “philatelist,” that some collectors elevated themselves above hobbyists (who simply amassed stamps with passing interest) into the realm of the serious collector.

Perhaps the highest achievement of a collector is to be considered a connoisseur – an aficionado and an expert – of his chosen subject, be it art, stamps, guns, or even insects! We get the word “connoisseur” from the French verb, connaître, which means to know. However, the French have two different forms of this word “to know” — connaître and savoir. Savoir means to know factual information (like addresses or historical dates) or to know how to do something, but connaître is used when one knows something through experience or familiarity. While the collector, of course, knows his subject through study of factual information, he also knows his collection through proximity or closeness. Through the intense personal investment of time and interest (and often money) some collectors developed a special and authoritative knowledge gained only through deep commitment and experience.

Although collecting is a tangible and materially goal oriented activity (with the goal being to physically gather together), it also satisfies something deep within the collector; the collection provides for him a sense of accomplishment and acts a source of pride, even comfort and, in some cases, prestige. 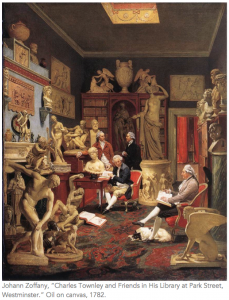 Punctuated by the princely and the peculiar, collections and the phenomenon of collecting have a long and rich history in the Western world. It is a social, cultural, and economic history that encompasses the realms of art, medicine and natural science (to name just a few). It is personal collecting that would ultimately give rise to many of the first modern museums. Collection comes from the Latin collectionem, meaning, “a gathering together.” The actions of the collector by definition include acquisition and arrangement principally, but also include the equally important aspect of presentation – the collection is something that is put on display for and viewed by an audience. It is the intense love of and passion for (perhaps an obsession with) a particular subject or object that truly characterizes the genuine collector.

An element of the “collection” not addressed in the formal definition is the way in which through this strategic gathering together the collector creates a microcosm, or a miniature version of the world. Take the example of the typical zoo, which is a collection of different animals from disparate parts of the globe, which have been gathered (often unnaturally) together at a single site. Animals are taken out of the real world and brought into the world of the zoo with the idea being that in this one specific place all the animals of the world can be seen together. This understanding of collections as microcosms includes museums (museums of art, anthropology, aviation, science, etc.) as well as personal collections of objects. Philately is a particularly good example of the microcosm because of the way in which stamps relate to geography and history. The stamps in a comprehensive collection are able to represent many different places and times in one single space at any time. One way to understand this is to imagine how the pages of carefully organized stamps typically seen in a philatelist’s collection form a kind of unique, historical map of the world. 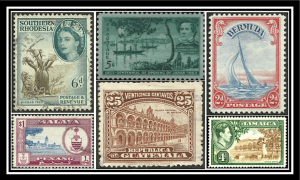 In the basic system of collecting, objects are taken out of the real world in which they have functional and economic value and brought into the world of the collection, where their value is transformed and often personal to the collector. However, the worth of the collection can also be validated and informed by the collector’s peers and audience. This brings us back to the theme of display and presentation and invites an exploration of the way in which the collector is also fundamentally a curator.

While the first definition of curate relates directly to the Latin root of this word, curatus meaning “to take care of,” the second directly describes the actions associated with collecting – selection; organization, classification, or arrangement; and presentation or display. Through the action of curating, the collector is able to control the way in which the audience views his collection. This is typically done through strategically ordering, arranging, and grouping objects as well by visually highlighting certain items – all according to the collector’s own judgment, interest, and aims. In this way the collector is able to extend the personal experience of his collection to the audience. While the majority of the stamps in our upcoming auction are being sold individually, to some degree removed from their original context within Barnes’ collection, the stamps in a number of lots remain on the page in the same positions Barnes placed them in many years ago.

The truth is that the spirit of the person cannot be divorced from the objects they once collected. In our Western culture, especially in the auction world, there is a sense that objects have lived. We like to think that objects are witnesses to history. We wonder, “If these walls could talk…” We value something not merely by its appearance and composition, but by its history – when and where it existed, who owned it, who touched it. In a very real way, objects do have a lived existence and there is a kind of aphoristic belief that whoever has owned the object makes a kind of impression upon it. This is especially true in the case of objects that once belonged in a collection. For a time, in a place and all because of a specific person (Barnes), these stamps were brought together in a personal and unique manner – making Barnes’ collection totally one of a kind. What we find at the heart of the collection is the special way in which it unites the inner world of an individual with the outer world of objects through the tangible evidence of his interests – personal and private passions made material and, at times, made public. The collection is a microcosm, a unique world reflected and understood through the eyes of the collector.