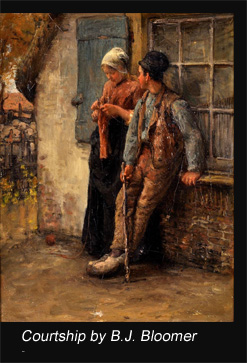 Witherells reached out across the breadth of America – from California to Boston – to establish the provenance of two paintings that will highlight our iGavel Antiques and Fine Art Summer Auction July 9 to 23.

When an estate dealer brought two paintings to us I felt the works might be significant but we had no identity for the artists. We noticed that “Vose Galleries” was incised on the frames of both. Since this distinguished gallery was founded in 1841, I was hopeful their experts could do some sleuthing and give these works some historical context and identity.

Using a 4-digit inventory number, the gallery was able to identify the artist, title and purchase date of both. Vose Galleries purchased Frank Duveneck’s “Reflections” from artist Theodore Wendel and sold it to a private collection in December, 1922.

Born in 1848 in Covington, Ken., Frank Duveneck went abroad to study in 1869 at the Royal Academy of Munich where he became one of the young American painters. By starting a new movement using a more realistic style of painting, he helped overturn the Hudson River School that was in vogue at the time. In 1878 Duveneck opened a school in Munich with students known as the “Duveneck Boys.” When shown in Boston around 1975, his work began to attract attention with author Henry James calling him an “unsuspected genius.”

The other painting identified by Vose experts is “Courtship Days” by B.J. Blommers. Born in The Hague in 1845, Blommers was a successful painter of genre scenes such as fisherman and their wives.
The work was purchased from a private collection in 1919 and sold in August, 1924 through Beard Gallery to the same collector who purchased the Duveneck – explaining why they showed up on Witherell’s doorstep together. Interestingly, both painters are nineteenth century American artists who studied in Europe. The pieces are estimated at $5,000 to 10,000 each.

Tracing the provenance of works like these is yet another fascinating aspect of our work. It’s also an opportunity for me to reach out to my colleagues across the nation and tap their expertise. Of course, appraisers and auction houses compete, but at the same time we collaborate to complete the story of artifacts that might otherwise be lost to the passage of time. A warm Witherell’s ‘thank you’ to Vose Galleries (the nation’s oldest family-owned art gallery) for helping us paint a more complete picture of artwork in our Summer Online Auction.

Visit us on iGavel July 9!