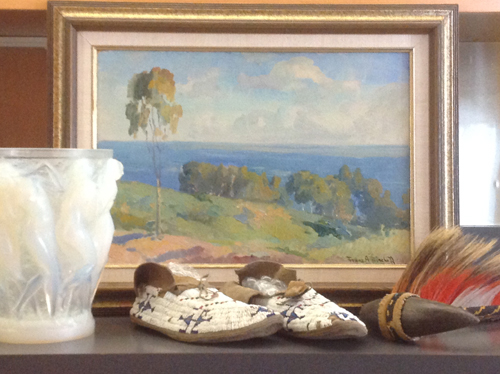 Antiques appraiser Brian Witherell’s recent trip to Butte County yielded a bounty. The artifacts of a Plains Indian warrior were brought out of storage by an older Oroville woman who inherited them in 1982 from her father, who had lived in Missoula, Mont. The items came into the family by way of marriage to a full-blooded, Indian squaw and were passed down to the owner’s father.

The group included beaded moccasins, two ceremonial clubs and porcupine-quill headdress and a beaded tobacco bag. The possessions of Native American warriors rarely remained intact, making them very hard to come by. Luckily, this archive contains nearly all the prestigious items a brave would have had. This unique find will be offered in Witherell’s annual Western Design Auction this coming May with a conservative estimate of $3,000 to $5,000.

In Paradise, we found a chandelier that had belonged to Clark Gable. The late 19th-early 20th century gilt bronze chandelier made its way to Paradise bee keeper through a retired Los Angeles doctor when he moved to Northern California. A friend of the consignor’s mother with no known relatives, it was given to the family upon the doctor’s passing. It will be offered in the October unreserved estates’ auction.

Three Plein Air paintings by the esteemed California artist Franz Bischoff were consigned to Witherell’s by a retired machinist whose mother had purchased them for a few hundred dollars at a Butte County charity event in the 1970s. Approximately 15 x 20 inches, the artworks will each carry a $3,000 to $5,000 estimate and will be sold in May’s Western Design Auction.

A Colusa County stop in Arbuckle on the way back to Sacramento was the site of this month’s most exciting discovery: a rare and early Bacchante’s vase. The opalescent glass vase by the famed Rene Lalique was identified by the owner’s friend who recognized the Lalique model from a magazine article and informed the unsuspecting owner. The vase was originally the property of his mother-in-law whose family founded Caterpillar Tractor. Valued at $15,000 to $25,000, this beautiful vase will be offered in our March 2016 premier auction.