What They Brought Home from the War 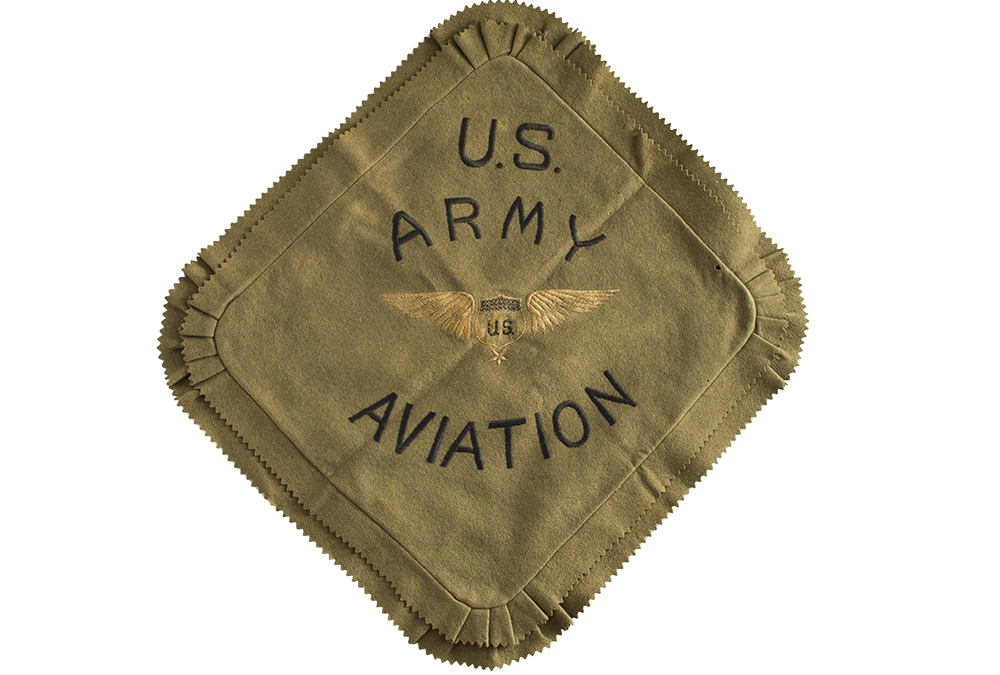 Delving through the huge number of really interesting pieces that have come in for our January sale, many things have impressed me—a number of them things that are unusual or even unique in my experience. Additionally, I am always looking for the story that the items tell—whether it is of life in the trenches, an heroic cavalry charge, or whatever the item may tell us.

Several items that have particularly caught my attention are things that veterans brought home from their War. One might expect that there would be grimness to these things, but surprisingly, there isn’t always.

A Bit of Cloth to Send Home.

Just today I found an item that really caught my interest. It was folded up in a plastic bag, and tucked in with a variety of things. At first I ignored it, since it looked like a piece of soldier’s blanket from World War I—an item of relatively little interest. However, I noticed that its edges were crimped instead of straight and square, so I took it out of its bag to discover its story was. As I unfolded it, I was utterly surprised. Although it was made from blanket wool, it was beautifully embroidered with a picture, and several words; the picture was a detailed World War I period US Pilot’s wing, in wonderful detail. The words were “US Army Aviation.” I realized that it was a cushion cover or pillow cover a soldier had made for his family at home.

I have seen many pillow covers—mostly from World War II—that have the name of a Military base on them, or even a service such as the Navy, but this is the first I had seen actually made from something the soldier would have used every day. When he had it made, he was actually sending a part of his life as a soldier home to his family. It is still beautiful, and tells a wonderful story. 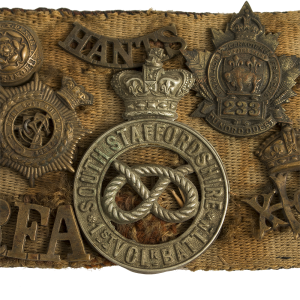 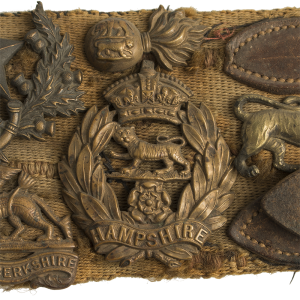 A Mystery on Canvas and Leather.

An item similar to things I have seen before is a so-called “Hate Belt.” This is supposedly a leather or canvas belt made of items that the soldier captured from the enemy. The reality is that there was a booming business among the French civilians in World War I especially manufacturing these belts. They were made out of discarded pieces of gear—a belt, or something similar—and decorated with badges, buttons, pieces of shrapnel, sometimes even coins. What makes them really interesting to the military historian is that they do tell a story of the location of the veteran’s unit when he bought the belt. There are several “Hate Belts” in the January sale, but one caught my eye. It is a British canvas and leather belt, with British cap badges on it. What makes it particularly interesting is that a number of the badges are Victorian, and quite rare ones at that! How in the middle of World War I did someone get their hands on this particular selection of badges— a number of which would have been obsolete for 15 years or more? We may never know, but we can speculate. Were some soldiers in the trenches near there wearing badges that were in some but not all cases, 29 years out of date? Were these badges gathered near a hospital, from men who would never need them again? These answers are possible, and there are probably other possibilities as well. What is wonderful is that our bidders will have the opportunity to buy a unique piece of militaria that includes British badges that are almost never seen for sale, and they have two layers of history to them: the Victorian era, and World War I. 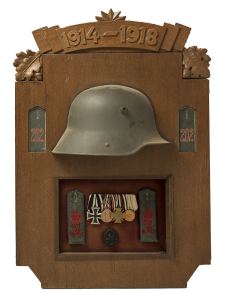 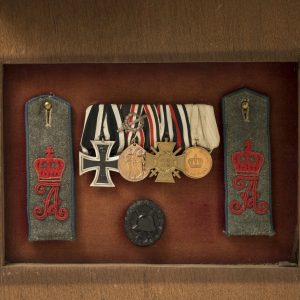 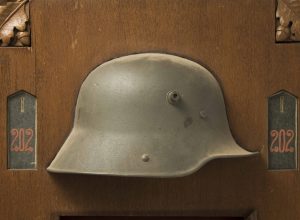 The Half He Didn’t Need.

The other item is a variation on something I have often seen: a wooden plaque mounted with the soldier’s medals, and in this case, his shoulder boards and wound badge as well. This is a German piece, and it is mounted on a handsome oak board, with inset frames for the veteran’s medals and shoulder boards showing his rank and unit. What makes this particular board unique is that mounted above his medals is half of his steel helmet! The craftsman who made this very carefully sliced a German stahlhem— a steel helmet—from the visor to the back, and mounted the half with other trophies of the veteran’s service. I have wondered why he did this. Had his helmet saved his life? Was this the half that didn’t have a bullet or shrapnel scar?

We can read the veteran’s history here: he was a Bavarian artillery enlisted man—that we know from his shoulder boards. He served with distinction- we can guess that from his receiving the Iron Cross, 2nd class. He was in the thick of things—several items tell us that. He received the black wound badge, so we know that he saw action! His unit was in the war from the beginnings in “the race to the sea,” in 1914, when the rapid German advance drove a large portion of the British Expeditionary Force to the sea, or internment in Holland. The unit continued through Verdun, and the Somme, and into the German Spring Offensive in 1918. Was this man with his unit from the beginning to the end? Unfortunately, the plaque is not named. We can make an informed guess though, just based on the fact that he apparently brought his steel helmet home with him.

There are many other “story telling mementoes, of course. Trench art- things actually made in the trenches by the men- are wonderful bits of collectible memory. One of the uniforms in the sale has two mementoes: a piece of barbed wire, and a piece of shrapnel. Those tell a grim story of their own. The items I have described may not be the ultimate in personal mementoes from the War, but they are personal to each of the soldiers who either created them, or had them created, and that makes them a powerful part of history to me.