Bits and Pieces of History 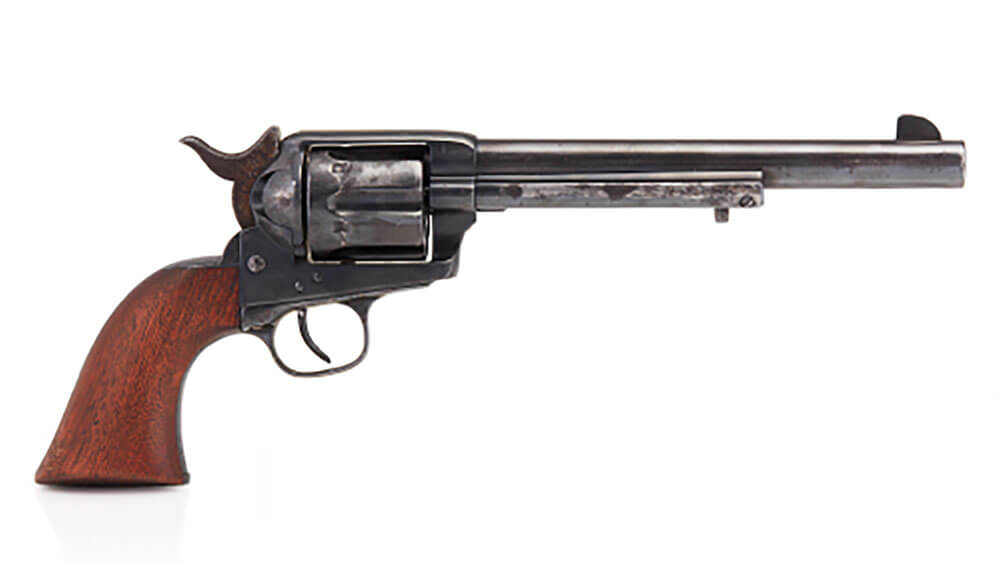 In our American West sale there is an item that really caught my attention, not because of condition (it is good) nor because of value (it is moderate) but because of where it has been, and the “stories it could tell!”

The item is a Colt Single Action, with a 7 ½ inch barrel, in .45 caliber “long Colt,” on a first generation frame. It has seen quite a bit of use, and shows it. It also has mixed serial numbers, which under other circumstances, would lower the value. In this gun, though, the serial numbers tell a remarkable story of longevity, and of how good firearms were “recycled” for generations.

There are actually three different serial numbers on this pistol, and each one has a part of the story, and here we have to thank famous Colt researcher John A. Kopec of Redding for his contributions.

The frame of the gun is stamped “US,” and is serial numbered 7217. This makes it part of a group of guns issued to the U.S. 5th Cavalry in 1875. During the Plains Indian Wars, the 5th earned a reputation for incredible endurance, and outstanding fighting qualities. After Little Big Horn, they were the unit that tracked down those who had killed General Custer, and brought them to justice at the Battle of Slim Buttes- the first victory of the Cavalry over the Indians following Little Big Horn. Part of this revolver was almost certainly there. 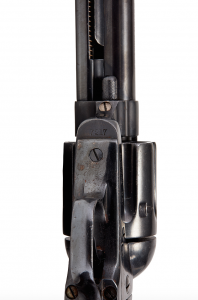 Returned to the Ordnance Department in 1893, the revolver was one of a group returned to Colt for “refurbishment.” At Colt’s factory in Hartford, Connecticut the gun was returned to “as new” condition, with the addition of parts from other guns, and a shortened barrel. At this time this particular gun gained parts from an 1874 made gun that had been issued to the 7th Cavalry in 1875. It also had its barrel shortened to “Artillery” length of 5 ½ inches. The guns were then intended for the State of New York, but before they were issued, they were re-directed by the Police Commissioner of New York City, a young man named Teddy Roosevelt, and many of this group of guns were issued to the famous “Rough Riders, “ and with them went up San Juan Hill. 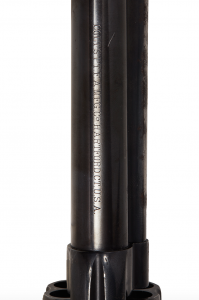 Following the Spanish-American War, the revolver was again returned to the Armory to be refurbished. Again, for the use of the Service, serial numbers were mixed, in order to maximize the serviceability of the guns. As a result, in 1901, the gun was shipped to the Philippine Islands, where it was issued to the San Fernando Police, a unit of the Philippine National Police, to be used in the suppression of the Moro Uprising, where it did service until 1912, when it was returned to the Arsenal, and sold out of service. Before it was sold, it was given a “new” cylinder- actually a repurposed cylinder, by Colt.

The story of this revolver was far from over: on the frame one can barely see the initials”WCCO.” These are the initials of the Western Costume Company, who until the 1940’s supplied the guns used in almost all of the pre-World War II westerns, including those of Tom Mix, Gene Autry, Roy Rogers, and even the early films of John Wayne. 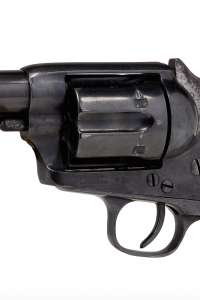 We don’t know when the gun regained its 7 ½ inch barrel, or what are apparently replaced walnut grips. What we can be certain of is this is a gun that saw a lot of use, – from the 5th and 7th Cavalry, possibly to the Rough Riders, and the Philippine Police, and then on to multiple appearances in the famed “Oaters” of the Golden Age of Hollywood! To me, that is plenty of excitement, and would make this old gun a wonderful piece to own.