About the Buyer’s Premium: The Definition, History and Reality of an Auction House Phenomenon

Sometimes it can seem like the inner workings and behind closed doors, brass-tacks business of certain industries are closed off to average, everyday clients and customers by design. Often this sense of confusion and exclusion is a result of impenetrable language or privileged code words. This is certainly the case in the art and auction world, where the extreme prevalence of such particular and exclusive language (or “industry lingo”) has warranted a specific name: International Art English, IAE or Artspeak for short. While the characteristic vocabulary of IAE may be more readily observed in an academic publication rather than an auction house catalogue, the fact remains that in both the art and auction world, words are sometimes valued for and employed because of their ability to intimidate rather than to communicate.

The museum, the auction house, and the gallery floor are often perceived to be places of elevated culture and, as such, in these environments it can be difficult to ask questions that seem uninformed. Nobody wants to come across as intellectually ill-equipped and while realistically one can do without the showroom definition of “biomorphic forms” or “gestural abstraction,” understanding auction terminology is essential, especially for potential clients, customers and consigners. Although auction house jargon may at first glance seem straightforward, the definitions, history, and the current functional reality of many auction terms are complex, necessitating numerous publications and even site-specific glossaries in order to help guide the individual making his or her foray into the auction world. One of the most infamous of these terms is “buyer’s premium.”

What is a buyer’s premium?

The buyer’s premium, a frequent and familiar phrase in the auction world, is simply the fee an auction house will charge the buyer on top of the hammer price, also known as the winning bid or sale price. While it is fine to leave the question of the buyer’s premium at this regularly regurgitated, but perfectly acceptable explanation, perhaps we would be better off asking the follow-up question: Why? Why is there a buyer’s premium? Furthermore, where does it come from? And when was it established? 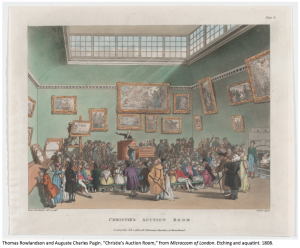 History of the Buyer’s Premium

Let’s begin with the when and where. The year is 1975 and in London two of the world’s oldest and largest auctions houses, Sotheby’s and Christie’s, both implement what they refer to as the “buyer’s premium,” a 10% charge on top of the bid price. For example, if an item or a lot at auction sells for $10,000 with the new buyer’s premium the successful bidder would have to pay $1,000 extra (for a total of $11,000), with the 10% charge going directly to the auction house in addition to the seller’s commission. 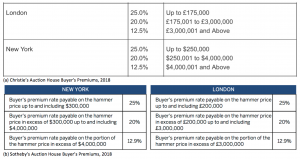 Why do auction houses charge an additional fee to buyers in addition to what the successful bidders are already paying?

The most common explanation is that the buyer’s premium contributes to covering the costs of running the auction house (helping to pay for the businesses’ facilities and resources), thereby ensuring quality service — including an accomplished staff, accurate information, marketing endeavors, etc. But, perhaps predictably, there is another understated and more self-serving explanation for the buyer’s premium’s continued use. The buyer’s premium is a way for auction houses to maintain profitability and, to a certain extent, auction houses charge buyers this fee because they can. The long dispute in London between the two dealers and Christie’s and Sotheby’s was never legally settled and buyer’s premiums have increased at a rate since 1980 (from 8% to 25%) that does not suggest a natural progression, but rather an intentional effort to increase income on the part of big international auction houses who are essentially charging a “premium” for the goods they bring to auction. It is this word, “premium,” that may reveal to us the deeper reason why some auction houses utilize the buyer’s premium.

By charging the buyer a percentage of the selling price of an item, the auction house can reduce the commission charged to the seller. Through this savings to the seller — made up to the auction house by the buyer’s premium fee charged to the purchaser — Christie’s and Sotheby’s intended to entice sellers to consign more objects with them rather than other auctioneers or dealers. The goal was to maintain the overall commission received, while transferring some of the burden from seller to buyer — consequently luring business away from dealers in the process and encouraging more items being brought to auction in general. Ultimately, this competitive strategy has worked. Although buyer’s premium rates have fluctuated over the years, they have become commonplace. More recent tiered pricing structures and targeted premium-free auction events are only adjustments to the standard buyer’s premium pricing system.

How does a prospective auction bidder determine the buyer’s premium prior to bidding? Well, it’s not always easy and you won’t find it unless you seek it out, as the specific rates and stipulations of the buyer’s premium are often only fully listed in the fine print of the auction house’s Terms and Conditions. The typical buyer’s premium charged across the nation now ranges from 12.5 to 25%. The higher premiums of 25% are applied to less expensive purchases, while the 12-15% premiums are applied to bids above a million dollars or more. Data gathered from the top five auction houses in California reflected the national range, with buyer’s premiums at 20-25% on average for purchases under $250,000. However, it is important to note that buyer’s premiums may be higher for internet bidders and when customers use payment methods other than the standard cash or checks.

What is Our Philosophy?

Witherell’s is betting on the idea that a modern world will not accept (sustain) a buyer’s premium. Buyer’s want to be rewarded, appreciated, and made to feel special. The current model is disproportionally designed to benefit the seller at the expense of the buyer. An auctioneer can make a very persuasive case to naïve consigners with 0% seller commission proposals. It would not nearly be so attractive an offer if the process were transparent — if the seller recognized the auction house was still receiving a 25% commission on the sale price of an item. However, as previously stated, buyer’s premiums have become and remain the “norm” in the auction industry. In order to remain competitive and to confidently maintain total transparency in our business dealings, Witherell’s strives to find that “sweet spot,” a balance between commissions charged to sellers and the premium paid by purchasers. In all instances, the goal is to ensure that we provide value to sellers and purchasers while offering the very best in facilities, marketing and services.  More recently, auction companies that sell exclusively online have changed the landscape — allowing both the auction companies and their customers (sellers and buyers) to benefit. Furthermore, some auctions include items/lots without a buyer’s premium. Witherell’s offers a blend of in-person, online only and hybrid auction settings and some of our auctions, including the monthly 3rd Thursday sale, do not include a buyer’s premium. We like to give our customers flexibility through these different options with the hope that ultimately all parties — customer, consigner, and auctioneer — benefit and enjoy their auction house experience.