A Music Box for the Ages Plays On 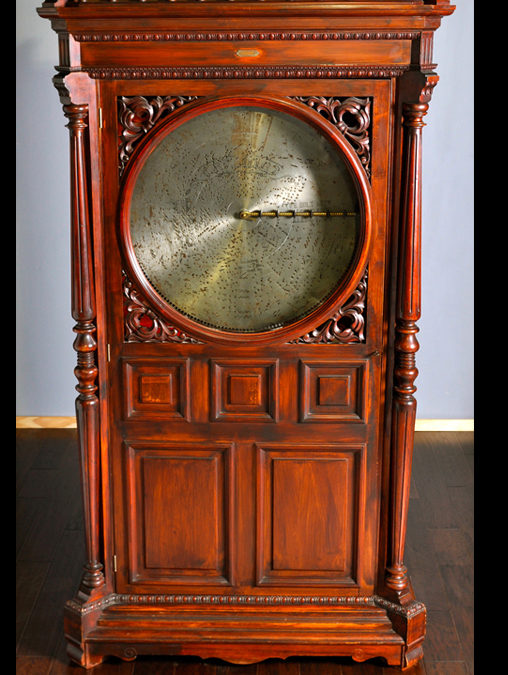 An unlikely series of events led to acquiring the sale of a Regina Music Box that’s recently graced our Midtown gallery. The Musical Box stands about 5.5 feet tall with a window showcasing a polyphon disc that plays 15 lively tunes with clarity that sets the toes to tapping!

The owner had seen me doing an appraisal on the Antiques Roadshow. Remarkably, she recognized me from that appearance while we were both shopping at the Sacramento Ikea store. She was excited to tell me about the music box that had been handed down through her family, early California settlers. My interest piqued and I asked questions to clarify just what she might have.A table model? Stand up? Small like a hatbox or big as a grandfather clock? I felt a familiar thrill of discovery as her replies indicated I was about to discover a West Coast antique treasure.

First, a little history about these Musical Boxes: The basic concept of the mechanism of Music Boxes in the 18th and 19th century reaches all the way back to Europe in the 16th century when Carillon bells rung warnings and music out of tall church steeples. The mechanism for the Music Box adapted the rotating barrel of metal teeth that, in turn, hit hammers that struck the bronze Carillon bells in the tower. Refinement of this technology for Music Boxes led to a booming industry in Switzerland and quickly spread across Europe.

Tiny musical snuff boxes for gentlemen were a popular early version but soon larger boxes were being manufactured for wealthy homes and for public places where they were coin operated. The rotating cylinders gave way to a metal disk, like the one in our Regina model. This allowed the owners to change disks for new musical selections. The Music Box companies cashed in on the demand for more music by also creating the disks for sale.

Most of this history took place in Europe. It wasn’t until 1892 (pretty late in the evolution) that makers made the move to America and established the Regina Music Box Company in Rahway, New Jersey. Of course, Regina’s early success here inspired numerous competitors. That keen competition as well as the invention of the Player Piano led to the eventual demise of Regina as a Music Box maker – with final blows dealt by the invention of the phonograph. Upstart Regina, however, was a survivor and retooled itself to manufacture and market Regina Vacuum Cleaners.

Since so much of this activity occurred on the East Coast, it’s quite rare to find a Music Box with a long history on the West Coast. And this example is a beauty! It’s not only an elegant time piece, but the quality of its music is exceptional. The owner had the mechanism professionally tuned and electrified. The sound is delightful. One the other hand, an absolute “purist” might find tinkering with its antique sound is undesirable. Let me say that we’ve enjoyed listening to its lilting tunes in our gallery despite the enhancement.

In appraising this piece of musical Americana we consider its history – a traceable provenance within a family for two generations; we look at condition – excellent; we assess the market – it’s been better but we’ve had some recent surprises; and we look at availability – we have not personally seen a Western Music Box of this quality before. So, what’s it worth? We are making a conservative estimate of $5,000 to $10,000. However, all it takes is one buyer in love with this iconic Regina to bring a higher bid to our iGavel online auction May 1 – 15.

We’ll have our Music Box on display at the upcoming Grass Valley Antique Show May 9 and 10 – and yes, it will be playing its merry tunes! Hope to see you there.